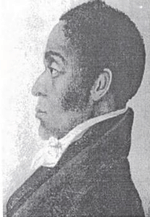 James Forten (September 2, 1766 – March 4, 1842) was an African-American abolitionist and wealthy businessman. A native of Philadelphia, Pennsylvania, he was the prosperous owner of a sail loft and spent almost all of his life in or near the Philadelphia waterfront around what is now called Penn’s Landing.

Although never elected to political office, and effectively disenfranchised, James Forten was a shrewd political operator. Year by year he grew in stature as a public figure. By the 1830s, his was one of the most powerful black voices, not just for men and women of color in his native city, but for many thousands more throughout the North. He knew how to use the press and the speaker’s podium. He knew about building alliances, when to back down and when to press forwards with his agenda. His rise to prominence, his understanding of the nature of power and authority, his determination to speak out and be heard are object lessons in the realities of community politics. Disfranchised he might have been, but voiceless he never was.”

James Forten used his wealth from the industry to advocate for temperance, women’s suffrage, and above all, equal rights for African Americans. Forten believed Blacks should work to improve their situation in the United States and should be granted equal protection under the law.

Back in 1801, he was among the signers of a petition to the U.S. Congress calling for the abolition of the slave trade and the modification of the Fugitive Slave Law of 1793. In 1813, he authored a pamphlet, “A Series of Letters by a Man of Color,” opposing a Pennsylvania Senate bill that restricted black immigration into the state, often the first refuge for freed people, as well as for runaways.”

James Forten and Bishop Richard Allen of the African Methodist Episcopal Church worked together to establish the first Convention of Color in 1817. This organization argued for the settlement of escaped black slaves in Canada but strongly opposed plans for repatriation to Africa. Forten did not believe African Americans should leave their “own” land and therefore stood against the agenda and activities of the American Colonization Society. Forten was an integral part of many protests against the Society. Just before Abraham Camp spoke about wanting to leave America, Forten and Allen led a protest against the American Colonization Society and acted as chair of the protest held at Bethel Church in Philadelphia, Pennsylvania. They organized 3,000 black Philadelphians to speak out against the activities of the American Colonization Society. Forten also opposed the British policy of resettling black Loyalist veterans of the Revolutionary War in Sierra Leone.

The Haitian Revolution created some support for American blacks to emigrate to Haiti after it achieved independence, as it was a black-led republic. Its independence introduced many complex issues for free Blacks in the United States. James Forten was one of the important Black leaders who were entirely against any emigration movements. He firmly believed that Blacks should be allowed to play an equal role in the United States, proposing that it was far better to fight for an egalitarian US society rather than to flee the country.

James Forten had not always stood against emigration and the American Colonization Society plans to “…send free and freed blacks to Africa. On one occasion, he had even given money to the ACS. He also supported Paul Cuffee who transported thirty-eight people to Sierra Leone in 1815.” Later Forten changed his mind, however. He came to consider the ACS as working against the interests of American blacks, and became a fierce opponent of re-Africanization.

James Forten was born free in Philadelphia, Pennsylvania, one of two children of Thomas and Margaret Forten (or Fortune). Thomas Forten was the grandson of a slave who had “freed himself.” After his father died, James Forten started working at age seven to help out his mother and sister, first as a chimney sweep and then as a grocery-store clerk. He also attended the African School, run by abolitionist Anthony Benezet, which was established by Quakers for free black children. His mother insisted that he still go to school for at least two more years. By age nine, Forten left school to work full-time. He used his early experience at work as a measuring stick for the rest of his career and life.

At the age of 14, during the Revolutionary War, Forten served on the privateer Royal Louis, captained by Captain Stephen Decatur, Sr. Upon the ship’s capture by British forces, Forten’s friendship with the son of the British captain who had captured the Royal Louis,Captain John Beazley, enabled him to be treated as a regular prisoner of war rather than being forced into slavery. He was sent to the English prison ship HMS Jersey, moored in Wallabout Bay, (later the site of the Brooklyn Navy Yard). When the American Revolution began, the British used her as a prison ship for captured Continental Army soldiers, making her infamous due to the harsh conditions in which the prisoners were kept. Thousands of men were crammed below decks where there was no natural light or fresh air and few provisions for the sick and hungry. Political tensions only made the prisoners’ days worse, with brutal mistreatment by the British guards becoming fairly common. As many as eight corpses a day were buried from the Jersey alone before the British surrendered at Yorktown on 19 October 1781.

James Forten was fortunate; he was able to survive seven months before he was freed in a prisoner exchange. He walked from Brooklyn to Philadelphia to his mother and sister. He would soon sail for England as a sailor, and stay there for over a year, working in a London shipyard

When James Forten returned to Philadelphia in 1786, he was apprenticed to a sail-maker named Robert Bridges, his father’s former employer and a family friend. Forten learned quickly in the sail loft, where the large ship sails were cut and sewn, and before long became foreman. At Robert Bridges’ retirement in 1798, Forten bought the loft and by 1810 made it one of the most successful sail lofts in Philadelphia. Believing in equal rights, Forten continued to employ both black and white laborers. Because of his business acumen, Forten’s sail loft was a great success and over the years made him one of the wealthiest Philadelphians in the city, black or white.

With his financial good fortune, James Forten could now afford to concentrate some of his energy on working towards the abolition of slavery, which he took to be one of his most important responsibilities as a prominent free black man in Philadelphia. In 1813 he wrote an anonymous pamphlet, although his authorship was never truly a secret, called Letters From A Man of Colour. The pamphlet denounced a bill the Pennsylvania legislature tried to pass requiring all black emigrants to Pennsylvania to be registered with the state. The bill was the result of many white Pennsylvanians’ complaints about the large number of blacks moving up from the south. Forten saw the bill as a step backwards for black Pennsylvanians and used his pamphlet to explain why. In his Letters, Forten argued that the bill would violate the rights of any free black people entering the state as well as enforce the general opinion that blacks were not equal to whites. Forten wanted the many respectable citizens of the black community to be recognized and valued in Philadelphia. In the end, the bill was not passed, and James Forten became known for his succinct and passionate pamphlet.

Years later Forten met William Lloyd Garrison, who would give him another outlet for his opinions. Garrison’s abolitionist paper, The Liberator, was constantly in need of funds but always seemed to get what it needed from James Forten. Forten not only helped to keep his friend’s paper afloat, but also found subscribers in Philadelphia for Garrison, circulated the paper around the city, and wrote letters to the paper that Garrison would publish under the name “A Colored Philadelphian.” Forten’s favorite topics were prejudice, abolition, and the American Colonization Society, or ACS. Forten worked against the ACS almost as soon as it had been formed. It was an organization composed only of white members that sought to send black Americans to a colony, Liberia, in Africa where they might live better lives. Forten, like many other free blacks, believed the ACS was trying to simply get rid of free black people under the guise of helping them. Although the ACS advertised Liberia as a place of opportunity for free blacks, the truth was that the colony struggled to survive and many of the colonists were dying. Forten and Garrison published as much as they could in The Liberator to expose the poor living conditions in Liberia that the ACS never revealed. They wanted others to know that the ACS was not necessarily working in the best interest of black Americans. Despite the work of Forten and Garrison, free blacks continued to move to Liberia. Forten actively opposed the ACS his entire life.

James Forten wrote letters to The Liberator, worked in his sail loft, met with his abolitionist friends, and stayed active in the abolitionist movement until very late in his life. He lived in Philadelphia with his wife and eight children until March 4, 1842, when he died at the age of 75. Thousands of people, both black and white, attended his funeral.

Like his father, Forten’s son Robert was a vigorous anti-slavery activist. Forten’s daughters Harriet and Sarah Louisa married the abolitionist brothers Robert Purvis and Joseph Purvis, respectively. The Fortens’ daughter Margaretta was an officer of the Female Anti-Slavery Society in Philadelphia in 1845 and a lifelong educator.

Carrying forward the family legacy to a new generation, the Fortens’ granddaughter Charlotte Forten Grimké was a poet, diarist and educator.

When James Forten died, he left behind an exemplary family, a sizable fortune, and a legacy of philanthropy and activism that inspired generations of black Philadelphians.