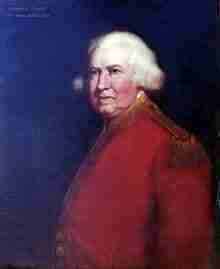 Grant was born on the family estate of Ballindalloch in Banffshire in the Northeast of Scotland. He began his military career by purchasing a commission as captain in the Royal Scots on October 24, 1744. The regiment was shipped to the Continent and Grant fought with them in the Battle of Fontenoy (1745).

By 1757, Grant was a major of the 77th Regiment of Foot (Montgomerie’s Highlanders), fighting in the French and Indian War. In 1758, he led part of the regiment in an expedition led by General John Forbes. On this expedition, he became acquainted with others who would also play larger parts in the American Revolutionary War: George Washington, Francis Marion, and Hugh Mercer, among others. He also gained a contempt for the colonial or militia troops that would colour his later views.

In September, Grant was assigned to lead an advance part of around 800 men to determine the French strength at Fort Duquesne. The force was mainly made up of militia, but he took along a number of officers from the regulars, since he had little respect for the colonial troops. He then decided to split his force hoping to encourage a French attack that he could surprise and overwhelm. Having no wilderness experience, he was ambushed himself by Indians and French on September 14, 1758. At this engagement, the Battle of Fort Duquesne, the British force was repelled with 342 men killed, wounded or captured. The prisoners consisted of Major Grant and 18 of his men. He was paroled soon after, and tried to blame his defeat on the failure of the colonial militia to follow orders.

In 1761, he commanded an expedition against the Cherokee during the Anglo-Cherokee War.

After being briefly stationed at Fort Ticonderoga, his regiment was moved to the Caribbean Theatre of the Seven Years’ War. They fought at the Siege of Havana, held by Spanish forces, which ended in the surrender of the city. When the war was over, the regiment was disbanded in America in 1763.

With the Treaty of Paris (1763), Britain gained control of Florida from the Spanish. They divided it into two colonies, and James Grant was named governor of East Florida in 1764. He move to his capital at St. Augustine, established the Florida-Georgia border, stopped Indian raids with the Treaty of Fort Picolata, and encouraged new settlement in his colony.

Grant’s ventures were ultimately profitable, but most attempts failed to produce results. He encouraged new agriculture, setting up trade in cotton, indigo, timber, and cochineal. He personally gained and developed several plantations as grants. Then, in 1771, illness forced him to return to England. Patrick Tonyn replaced him as governor. Grant appointed Dr. David Yeats, the Secretary of the Colony, to manage his plantations in his absence. Yeats’ letters to Grant concerning the properties have long interested Florida colonial historians.

Back home in Scotland, Grant was elected to Parliament as an MP for Tain Burghs. In the period leading up to the American Revolutionary War, he became one of the most outspoken of the anti-American members. In a speech early in 1775, he remarked that the colonists “…could not fight…”, and declared that he could “go from one end of America to other and geld all the males.”

By the summer of 1775, he was returned to active service, and Colonel Grant was ordered to America. He arrived in Boston on July 30. In the aftermath of the Battle of Bunker Hill, he urged General Gage to move the troops to New York City, to have room to manoeuvre. His advice was ignored at the time, and he remained as a supernumerary until December, when he was made colonel and commander of the 55th Regiment of Foot. He would hold that command until 1791.

His prediction that Boston was an untenable position was proved correct the following spring, and, on March 17, 1776, he accompanied the general withdrawal to Halifax, Nova Scotia . By the summer of 1776, General William Howe had replaced Gage as commander, and took Grant’s advice about New York. Grant was given the provisional rank of major-general, and played several key parts in Howe’s movements. Fortunately for the Americans, Howe refused advice from Grant, who proposed burning Boston, Marblehead, New York, and Philadelphia.

As the New York Campaign sought to give the British control of New York City, Grant had become Howe’s primary planning officer. He developed two plans, each of which was designed to both gain control of territory and to deal a serious or fatal blow to the American army. These resulted in the Battle of Brooklyn, and Battle of White Plains. Both of these were British victories, as was the overall campaign, but General Washington avoided the death blow each time.

In the Battle of Long Island on August 26 and 27, Major General Grant led the division that landed on the left wing. He was to engage the American right and divert attention from Howe’s flanking manoeuvre with the main body. An advance unit of his troops engaged the Americans at the Red Lion Inn, which was the first engagement of the battle. Grant completed his mission, and severely defeated the American General William Alexander’s division.

After the event, Grant was unfairly criticised by some for allowing the escape of most of this force. It is true that he had almost 7,000 men in ten regiments opposing Alexander’s 1,600 Continentals, but there are two factors that mitigate this criticism. First, he stopped according to the plan, awaiting Howe’s attack on the American rear, rather than attacking the Americans dug in on the heights. Second, he was running low on ammunition, since the boats and logistic support were busy ferrying and supplying the Hessian units on the right and the main body that was landing at Gravesend.

Grant quick-marched his battalion to the Battle of White Plains, but he arrived too late. In 1777, Grant devised the battle plans for the Battle of Brandywine Creek.

=== Philadelphia and the West Indies ===

Grant was unsuccessful in trapping Gilbert du Motier, marquis de Lafayette, at the Battle of Barren Hill, on 20 May 1778. Lafayette held the position along the Schuylkill River with 2,200 troops and five guns. His front was picketed by 150 light infantry and 50 Oneida Indians under Allen McLane and his left was held by James Potter and 600 Pennsylvania militia. The bulk of his command was formed by a veteran brigade under Enoch Poor. Sir William Howe sent Grant with 6,000 men and 15 guns to circle wide to the right and come in behind Lafayette’s force, while he attacked in front with 4,000 soldiers. Charles Grey with 2,000 British and Hessian grenadiers was ordered to strike the American left flank. The maneuver began auspiciously when Potter’s milita dispersed in the face of Grant’s column. However, the capture of two of Grey’s soldiers warned Lafayette of his danger. Meanwhile, Grant halted his troops to wait for Grey to appear and this allowed the Americans to begin moving back to Matson’s Ford. When Grant finally lurched forward again, Lafayette sent some of Poor’s troops forward in a feint. Grant was fooled and stopped his advance a second time. By the time he realized what was happening, most of the Americans had slipped out of his grasp via a road that the British were not aware of. Grant nevertheless unleashed his cavalry in pursuit, but they took the wrong route and only arrived in time to see the last of Lafayette’s men crossing at Matson’s.

Finally, Grant was shipped off to the West Indies. On October 27, 1778, he led a successful expeditionary force to capture the French West Indian island of St. Lucia. A superior French garrison, surrendered on 28 December, at the Battle of La Vigie.

On 1 April 1779, Lord Germain instructed Grant to establish small garrisons throughout the West Indes. Grant had the moral courage to defy Germain and refused to carry out this order. In his letters of 8 and 17 July, he pointed out to the Secretary of State for America that naval superiority was paramount and that small detachments on every island would not be wise. Instead he deployed the West Indes garrisons to cover the major naval bases. He posted the 15th, 28th, and 55th Foot and 1,500 gunners at Saint Kitts. The 27th, 35th, and 49th Foot and 1,600 gunners defended Saint Lucia. Meanwhile, the royal dockyard at Antigua was held by an 800-man garrison of the 40th and 60th Foot. Grant also reinforced the fleet with 925 soldiers. He embarked for England on 1 August 1779, but his dispositions provided the basis for the British successes in the Caribbean during the final years of the war.

In 1780, he was defeated in parliamentary elections. In 1782, he was appointed a Lieutenant General. In 1787, he was re-elected to Parliament. In 1789, he was appointed Governor of Stirling Castle, and Commanding General of the Army in Scotland. In 1791, he was transferred from the 55th to the 11th Foot. In 1796, he was appointed a full General, and retired from active military services. In 1802, he retired to his estate on the Avon and Spey rivers as the Laird of Ballindalloch, after relinquishing his seat in Parliament. In 1805, he retired from the British army. He died at 86 on 13 April 1806. His estate went to his grandnephew, George Macpherson.