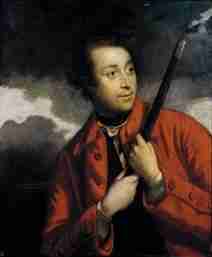 General James Inglis Hamilton, (before 1742 – 27 July 1803) was a Scottish soldier. He enlisted in the British Army in 1755 and commanded several regiments. He was the only colonel of the 113th Regiment of Foot. During the Seven Years’ War (1756–1763), Hamilton fought in the Siege of Fort St Philip, the Raid on St Malo, and the Capture of Belle Île.

In the American War of Independence (1775–1783), Hamilton fought in the Invasion of Canada and the Battle of Freeman’s Farm, commanding the middle column during the latter. He was in the Convention Army, imprisoned in Cambridge, Massachusetts after its surrender following the Battles of Saratoga. While a prisoner of war, he adopted James Hamilton, the son of a non-commissioned officer in the British Army.

After his brother’s death, Hamilton took over Murdostoun, where he renovated the castle extensively. Under the 15th Regiment of Foot, Hamilton participated in Battle of Martinique as well as the Invasion of Guadeloupe in the French Revolutionary Wars. He died on 27 July 1803 at Murdostoun and is buried at Kirk O’ Shotts graveyard. His adopted son took over Murdostoun before dying at the Battle of Waterloo.

Very little is known of Hamilton’s early life. He was the third son of Alexander (died 1768) and Margaret Hamilton (died 1742). His two older brothers were Alexander (died 1783) and Gavin Hamilton (1723–1798), the latter a painter and archeologist in Rome. Inglis was added to the family name in 1719 as a condition of the will by which Alexander Inglis bequeathed Murdostoun to his nephew Alexander Hamilton, James’s father.

Hamilton enlisted in the British Army on 28 February 1755 and was stationed at Portsmouth. He first saw action in June 1756 at the Siege of Fort St Philip, part of the Seven Years’ War. Assigned to the 34th Regiment of Foot, he was one of the 2,800 British soldiers fighting under the command of William Blakeney against 15,000 Frenchmen under the Duke de Richelieu and Roland-Michel Barrin de La Galissonière. The French sailed to Fort St. Philip and forced the British to surrender. During the siege, Admiral John Byng sailed there with a relief group, hoping to save the island for the British, but was unsuccessful. The French killed or wounded 400 British in the French victory.

Hamilton fought in the Raid on St Malo in June 1758. The British landed near St Malo, at first planning to attack the town. However, they decided to destroy shipping first and attack the town later. Finding that to occupy the town would require a full siege, for which they had insufficient troops, they occupied St Servan, where they burned over one hundred vessels including thirty privateers. British ships retreated after seeing a large French force, but sailed around the coast for a few weeks seeking another place to attack. Even though the Raid on St Malo was small and little damage was done, it is considered a British victory.

In 1761, Hamilton took part in the Capture of Belle Île as one of the 5,000 British troops led by Studholme Hodgson. The first attempt by the British was unsuccessful and lost approximately 500 troops. With reinforcements, a second attempt succeeded on 7 June 1761.

On 17 October 1761, while holding the rank of major, Hamilton became major commandant (colonel) of the 113th Regiment of Foot. It was formed from independent companies and served as a depot for sending drafts to Highland regiments serving overseas. The regiment disbanded in 1763, and Hamilton retired on half pay. He became a lieutenant-colonel on 25 May 1772.

In 1774, Hamilton commanded the 21st Regiment of Foot in the American War of Independence; General John Burgoyne said that he “was the whole time engaged and acquitted himself with great honor, activity, and good conduct.” Early in 1776, while in the 21st Regiment, Hamilton accompanied General Guy Carleton in the British response to the Continental Army’s 1775 invasion of Quebec. On 15 September 1776 he was appointed temporary commander of the 1st Brigade when Brigadier General Nesbit fell ill. Upon Nesbit’s death, Hamilton was promoted to brigadier. He was assigned to the 2nd Brigade, which consisted of the 34th, 53rd, 62nd, and 20th Regiments of Foot. It was originally intended to include Hamilton’s 21st Regiment of Foot in the brigade, but it was replaced by the 53rd.