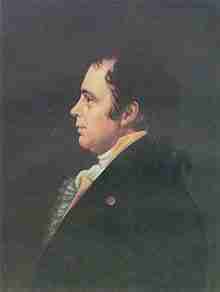 James McHenry (November 16, 1753 – May 3, 1816) was an Irish-born American statesman. McHenry was a signer of the United States Constitution from Maryland and the namesake of Fort McHenry. He was a delegate to the Continental Congress from Maryland, and the third United States Secretary of War (1796–1800), under the first and second presidents, George Washington, (administration: 1789-1797) and John Adams, (administration: 1797-1801).

McHenry was born into a Scots-Irish Presbyterian family in Ballymena, County Antrim, Ireland (present day Northern Ireland) in 1753. Alarmed that he became sick from excessive studying, his family in 1771 sent him at age 17 to North America to recuperate. Recent scholarship suggests that the family may have also sent him to the colonies as an “advanced scout” to see if the entire family would wish to relocate, which they did a year later. Upon arrival, McHenry lived with a family friend in Philadelphia before deciding to finish his preparatory education at Newark Academy. Returning to Philadelphia, McHenry then apprenticed under Dr. Benjamin Rush and became a physician.

McHenry served as a skilled and dedicated surgeon during the American Revolutionary War. On August 10, 1776 he was appointed surgeon at the age of 22 of the Fifth Pennsylvania Battalion stationed at Fort Washington (New York). He was taken prisoner the following November when the fort was taken by Sir William Howe. While there, he observed that prisoners were given very poor medical attention and initiated reports to that effect, to no avail.

He was paroled in January 1777, and released from parole in March 1778. Having sufficiently impressed George Washington, he was appointed aide as secretary to the commander-in-chief in May 1779. McHenry was present at the Battle of Monmouth. In August 1780 he was transferred to major-general Lafayette’s staff, where he remained until he retired from the army in the autumn of 1781.

Following the war, McHenry was one of three physicians (others were Hugh Williamson and James McClurg) who participated in the Constitutional Convention to create the new Constitution of the United States.

He was elected by the legislature to the senate of Maryland on September 17, 1781, and elected as delegate to congress by the Maryland legislature on December 2, 1784. After a controversial campaign, he was elected to the Maryland House of Delegates on October 10, 1788. Two years later he retired from public life and spent a year actively engaged in mercantile business. On November 15, 1791 he accepted a second term in the Maryland senate where he served for 5 years.

During this time, president Washington had difficulties with his second administration, as his cabinet officers Hamilton and General Knox resigned. In addition, he had a vacancy after appointing Timothy Pickering to the State Department. After a few of Washington’s preferred cabinet selections declined the position, his friend McHenry’s name surfaced. Washington appointed McHenry Secretary of War in 1796 and immediately assigned him the task of facilitating the transition of Western military posts from Great Britain’s control to that of the United States, under the terms of the Jay Treaty.

McHenry advised the senate committee against reducing military forces. He was instrumental in reorganizing the United States Army into one of four regiments of infantry, a troop of dragoons, and a battery of artillery. He is credited with establishing the United States Department of the Navy, based on his recommendation that the “War Department should be assisted by a commissioner of marine.” on March 8, 1798.

During President John Adams’s administration (1797-1801), he also appointed McHenry as his Secretary of War, as he had decided to keep the newly established institution of the presidential cabinet intact. There was no precedent to follow in the new constitutional government. Adams gradually found that three members of the cabinet: McHenry, Pickering (the Secretary of State), and Oliver Wolcott (the Secretary of the Treasury), became a drag on his administration and programs. They appeared to listen more to Adams’ adversary Alexander Hamilton than to the president. The three publicly disagreed with Adams and, instead of resigning, stayed in office working against his official policy. It is unknown if Adams knew they were being disloyal. Although many liked McHenry personally, Washington, Hamilton, and Wolcott were said to have complained of his incompetence as an administrator.

McHenry attributed Adams’ administration troubles to the president’s long and frequent absences from the Capital, leaving business in the hands of secretaries who bore responsibility without the power to properly conduct it. During the election of 1800, McHenry goaded Hamilton into releasing his indictment against the President. It questioned Adams’s loyalty and patriotism, sparking public quarrels over the major candidates and eventually paving the way for Thomas Jefferson to be elected as the next President. After losing re-election in the Fall of 1800 (to third President, Thomas Jefferson), Adams replaced McHenry, requiring his resignation. McHenry, Pickering, and Wolcott all resigned. President Adams later appointed Samuel Dexter as the fourth Secretary of War.

In 1792, McHenry purchased a 95-acre tract from Ridgely’s Delight and named it Fayetteville in honor of his friend Lafayette; he spent his remaining years there. During that time, McHenry continued frequent correspondence with his friends and associates, in particular Timothy Pickering and Benjamin Tallmadge, with whom he maintained Federalist ideals and exchanged progress of the war.

An attack of paralysis in 1814, left him with severe pain and complete loss of the use of his legs. He died two years later. Upon the death of her beloved husband, Mrs. McHenry wrote:

“Here we come to the end of a life of a courteous, high-minded, keen-spirited, Christian gentleman. He was not a great man, but participated in great events and great men loved him, while all men appreciated his goodness and purity of soul. His highest titles to remembrance are that he was faithful to every duty and that he was the intimate and trusted friend of Lafayette, of Hamilton, and of Washington).”