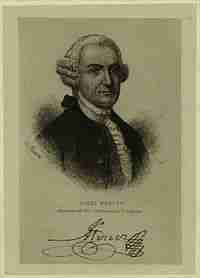 James Mercer (February 26, 1736 – October 31, 1793), also known as William James Mercer, was born in Virginia at Malborough plantation on February 26, 1736. He was the son of John Mercer and Catherine Mason Mercer. He graduated from the College of William and Mary about 1755.

He served as a captain in the French and Indian War and was commander of Fort Loudoun in Winchester, Virginia, in 1756.

and became a member of the House of Burgesses in 1765. In 1774, he was a member of the general assembly. He was an American lawyer and jurist who served as a delegate for Virginia to the Continental Congress in 1779.

Mercer was the brother of George Mercer and John Francis Mercer, and father of Charles Fenton Mercer.