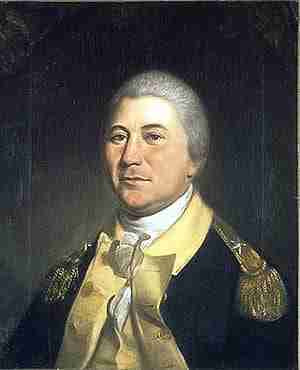 James Mitchell Varnum (December 17, 1748 – January 9, 1789) was an American legislator, lawyer, general in the Continental Army during the American Revolutionary War, and a pioneer to the Ohio Country. “The career of Gen. Varnum was active, but brief. He graduated at twenty; was admitted to the bar at twenty-two; entered the army at twenty-seven; resigned his commission at thirty-one; was member of Congress the same year; resumed practice at thirty-three, and continued four years, was elected to Congress again at thirty-seven; emigrated to the west at thirty-nine, and died at the early age of forty.”

James Mitchell Varnum was “a man of boundless zeal, of warm feelings, of great honesty, of singular disinterestedness; and, as to talents, of prodigal imagination, a dextrous reasoner, and a splendid orator. He was a man made on a gigantic scale; his very defects were masculine and powerful, ‘and, we shall not soon look upon his like again.'”

James Mitchell Varnum was born in Dracut, Massachusetts. As a young man he matriculated at Harvard College only to transfer to the College in the English Colony of Rhode Island and Providence Plantations (later named Brown University), where he graduated with honors in 1769. In Rhode Island he met his future wife.

==Leadership in the American Revolution==

Along with Nathanael Greene he served in the Kentish Guards. He served as a brigadier general in the Continental Army during the Revolutionary War, serving from 1777 until 1779. Varnum advocated allowing African Americans to enlist in the Continental Army, which resulted in the reformation of the 1st Rhode Island Regiment as an all-black unit. Varnum was a disciple of General Charles Lee and a serious critic of the position of Inspector General held in 1778 by Baron Von Steuben. After Varnum resigned his Continental Army commission because of personal business matters, he was appointed major general of Rhode Island militia. He led troops in the service of the United States in July and August, 1780, under the Comte de Rochambeau who commanded allied troops sent by King Louis XVI of France. General Varnum served at the siege of Boston, the battles at Long Island, White Plains, Red Bank, at Valley Forge and the battle of Rhode Island.

Varnum was an original member of the Rhode Island Society of the Cincinnati and served as president of the Society from 1786 until his death in 1789.

He later represented Rhode Island in the Continental Congress (1780–1781 and 1787). After the Revolutionary War, along with General George Washington, Nathanael Greene, Henry Knox, Thomas Pinckney, Charles Cotesworth Pinckney and several others, he became a founding member of the Society of the Cincinnati.

Varnum was also well known as a jurist. He successfully represented the defendant in Trevett v. Weeden one of the earliest cases of judicial review. In 1787, Varnum was appointed a justice of the Supreme Court of the Northwest Territory, and moved to Marietta, Ohio, to take up his duties; he was one of the early pioneers to the Northwest Territory. He died less than two years later of consumption, and his marker is located in the Oak Grove Cemetery in Marietta. His college classmate the distinguished physician Solomon Drowne eulogized him during an oration at the one-year anniversary celebration of the founding of Marietta: But of these worthies who have most exerted themselves in promoting this settlement, one, alas! is no more; one whose eloquence, like the music of Orpheus, attractive of the listening crowd, seemed designed to reconcile mankind to the closest bonds of society. Ah! what avail his manly virtues now! Slow through yon winding path his corse was borne, and on the steepy hill interred with funeral honors meet. What bosom refuses the tribute of a sigh, on the recollection of that melancholy scene, when, unusual spectacle, the fathers of the land, the chiefs of the aboriginal nations, in solemn train attended; while the mournful dirge was rendered doubly mournful mid the gloomy nodding grove. On that day even nature seemed to mourn. O Varnum ! Varnum! thy name shall not be forgotten, while gratitude and generosity continue to be the characteristics of those inhabiting the country, once thy care. Thy fair fame is deeply rooted in our fostering memories…