Vice-Admiral Sir James Nicoll Morris KCB (1763 – 15 April 1830) was a Royal Navy officer with a history of distinguished service during the American War of Independence, French Revolutionary War and Napoleonic Wars, especially at the battle of Trafalgar in 1805, where the majority of his ship’s crew were killed or injured, including Morris himself who was wounded in the knee. Throughout all his service, Morris was respected for his “strict sense of honour” and “simplicity and singleness of heart for which he was remarkable”.

Born into a seafaring family in 1763, Morris joined the navy in 1775 and served aboard several ships, including HMS Prince of Wales in numerous actions off the United States seaboard and in the West Indies. In 1776 his father, Captain James Morris RN, was killed whilst attacking Fort Moultrie off Sullivan’s Island near Charleston, South Carolina, under the command of Lord Cornwallis, but Morris was not present being stationed off the Leeward Islands. In 1779 he fought at the battle of St. Lucia and at the battle of Grenada, making lieutenant the following year as a reward for his good service.

At the outbreak of the French Revolutionary Wars, Morris was in command of the sloop HMS Plato and succeeded in capturing his French counterpart Lutine off Newfoundland, for which he was promoted Post captain in 1793. Taking over the frigate HMS Lively, he commanded her until she was wrecked on Rota Point off Cadiz, and then commanded the frigate HMS Phaeton in the Mediterranean, co-operating with Austrian movements in the Aegean Sea and delivering Lord Elgin to Constantinople as ambassador. Following the Peace of Amiens, Morris was given command of the ship of the line HMS Colossus, a new, fast and powerful ship, which unfortunately had had a poor previous captain who left behind a backlog of unfinished maintenance work and a surly and unpaid crew.

Morris’s highly professional attitude and his strict disciplinary record soon straightened out the situation, and when the Colossus arrived off Cadiz in the summer of 1805, his ship was considered by Admiral Nelson to be amongst the crack ships of the squadron. Morris’s ship was placed in the middle of Collingwood’s division, and reached battle rapidly thanks to her good seamanship and recent repair. Once engaged, Colossus became embroiled in a gun duel with the Swiftsure, and was just gaining the upper hand when the Argonaute appeared from the smoke on her other side, rammed her and crushed her into the Swiftsure. Now with boarders crowding from both sides and unable to escape, Morris ordered his carronades to sweep the French decks clear whilst his main deck guns below fired into the hulls of the enemy. Such was the destruction that both ships drifted off on the swell with enormous losses, and the Swiftsure was captured soon afterwards by newly arrived ships. Colossus moved on and engaged the Bahama, dismasting her before HMS Orion arrived to administer the final blows.

Morris’s successes had come at a terrible price. His ship had suffered appalling damage as she was shot through by the two French ships and had lost 206 men killed or wounded, at least 50 casualties higher than any other ship in the fleet. Morris himself had been shot in the knee, and collapsed from loss of blood afterwards, having refused to leave the deck for treatment. His junior officers managed to get the badly damaged ship into Gibraltar, and Morris was lauded as a hero following his recovery.

Following the battle, Morris’s injury prevented any vigorous postings, and he fulfilled a number of shore and Home Fleet assignments until 1812, when he was promoted to rear-admiral and given a minor command during operations in the Baltic Sea. In 1815, he was initiated into the Order of the Bath, becoming a knight commander and he later made vice-admiral through seniority. Retiring after the war, he lived a peaceful life at Marlow on the Thames, and died at home in 1830 and was buried locally where a marble monument raised by his wife can still be seen. 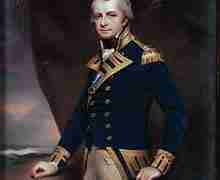