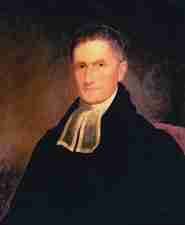 James Schureman (February 12, 1756{spaced ndash}January 22, 1824) was an American merchant and statesman from New Brunswick, New Jersey. He represented New Jersey in the Continental Congress as well as the United States House of Representatives and United States Senate.

James was born in New Brunswick and attended Queen’s College (now Rutgers University), graduating in 1775. When he graduated he raised a volunteer company in New Brunswick and led it as Captain in the Middlesex County militia. He led them in the Battle of Brooklyn on August 27, 1776 where he was captured. He was held as a prisoner of war until early in the spring of 1777 when he escaped to rejoin the Continental Army at Morristown.

Schureman returned to New Brunswick and took up a mercantile career while still serving in the militia. He was elected to the New Jersey General Assembly from 1783 to 1785. In 1786, New Jersey sent him as a delegate to the Continental Congress. That same year he was one of those at the Annapolis Convention that called for a new constitution for the United States. He continued in the Congressional session of 1787, then was returned to the state assembly in 1788.

When Schureman died in 1824 at New Brunswick, he was buried in the churchyard of the First Dutch Reformed Church there. The church and cemetery still stand and are located at Neilson and Bayard Streets.