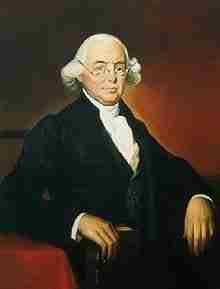 One of seven children, Wilson was born to a Presbyterian farming family on September 14, 1742 near St. Andrews, Scotland to William Wilson and Alison Landall. Wilson earned a scholarship to the University of St. Andrews. After graduating from the University of St. Andrews, he spent two years in Edinburgh and Glasgow studying Scottish Enlightenment thinkers, including Francis Hutcheson, David Hume and Adam Smith. Imbued with the ideas of the Scottish Enlightenment he moved to Philadelphia, Pennsylvania, in British America in 1766, carrying valuable letters of introduction. These helped Wilson to begin tutoring and then teaching at The Academy and College of Philadelphia (now the University of Pennsylvania). He petitioned there for a degree and was awarded an honorary Master of Arts several months later.

Wilson began to read the law at the office of John Dickinson a short time later. After two years of study he attained the bar in Philadelphia, and in the following year (1767), set up his own practice in Reading, Pennsylvania. His office was very successful and he earned a small fortune in a few years. By then he had a small farm near Carlisle, Pennsylvania, was handling cases in eight local counties, and was lecturing at The Academy and College of Philadelphia.

On 5 November 1771, he married Rachel Bird, daughter of William Bird and Bridget Hulings; they had six children together: Mary, William, Bird, James, Emily and Charles. Rachel died in 1786, and in 1793 he married Hannah Gray, daughter of Ellis Gray and Sarah D’Olbear; the marriage produced a son named Henry, who died at age three. Hannah had previously been the widow of Thomas Bartlett, M.D.

Wilson published in 1774 “Considerations on the Nature and Extent of the Legislative Authority of the British Parliament.” In this pamphlet, Wilson argued that the Parliament had no authority to pass laws for the American colonies because the colonies had no representation in Parliament. It presented his views that all power derived from the people. Yet, he wrote that the people owed their allegiance to the English king. Even at this moment when everyday Americans started to directly confront the British, he wrote the above-mentioned pamphlet in support of the crown which includes: “A denial of the legislative authority of the British parliament over America is by no means inconsistent with that connexion, which ought to subsist between the mother country and her colonies.” Nevertheless scholars considered his work on par with the seminal works of Thomas Jefferson and John Adams of the same year, it was actually penned in 1768, perhaps the first cogent argument to be formulated against British dominance. Some see him as a leading revolutionary while others see him as another reluctant, elite revolutionary reacting to the stream of events determined by the radicals on the ground.

In 1775 he was commissioned Colonel of the 4th Cumberland County Battalion and rose to the rank of Brigadier General of the Pennsylvania State Militia.

As a member of the Continental Congress in 1776, James Wilson was a firm advocate for independence. Believing it was his duty to follow the wishes of his constituents, Wilson refused to vote until he had caucused his district. Only after he received more feedback did he vote for independence. While serving in the Congress, Wilson was clearly among the leaders in the formation of French policy. “If the positions he held and the frequency with which he appeared on committees concerned with Indian affairs are an index, he was until his departure from Congress in 1777 the most active and influential single delegate in laying down the general outline that governed the relations of Congress with the border tribes.”

Wilson also served from June 1776 on the Committee on Spies, along with John Adams, Thomas Jefferson, John Rutledge, and Robert R. Livingston. They together defined treason. (Page, p. 119.)

On October 4, 1779, the Fort Wilson Riot began. After the British had abandoned Philadelphia, James Wilson successfully defended at trial 23 people from property seizure and exile by the radical government of Pennsylvania. A mob whipped up by liquor and the writings and speeches of Joseph Reed, president of Pennsylvania’s Supreme Executive Council, marched on Congressman Wilson’s home at Third and Walnut Streets. Wilson and 35 of his colleagues barricaded themselves in his home, later nicknamed Fort Wilson. In the fighting that ensued, six died, and 17 to 19 were wounded. The city’s soldiers, the First Troop Philadelphia City Cavalry and Baylor’s 3rd Continental Light Dragoons, eventually intervened and rescued Wilson and his colleagues. The rioters were pardoned and released by Joseph Reed.

Wilson closely identified with the aristocratic and conservative republican groups, multiplied his business interests, and accelerated his land speculation. He also took a position as Advocate General for France in America (1779–83), dealing with commercial and maritime matters, and legally defended Loyalists and their sympathizers. He held this post until 1798 (until his death).

One of the most prominent lawyers of his time, Wilson is credited for being the most learned of the Framers of the Constitution. A fellow delegate in the Constitutional Convention of 1787 in Philadelphia made the following assessment of James Wilson: “Government seems to have been his peculiar study, all the political institutions of the world he knows in detail, and can trace the causes and effects of every revolution from the earliest stages of the Grecian commonwealth down to the present time.”

Wilson’s most lasting impact on the country came as a member of the Committee of Detail, which produced the first draft of the United States Constitution in 1787 (a year after the death of his first wife). He wanted senators and the president to be popularly elected. He also proposed the Three-Fifths Compromise at the convention, which made only three-fifths of the South’s slave population total to be counted for purposes of distributing taxes and apportioning representation in the House and Electoral College. Along with James Madison, he was perhaps the best versed of the framers in the study of political economy. He understood clearly the central problem of dual sovereignty (nation and state) and held a vision of an almost limitless future for the United States. Wilson addressed the Convention 168 times. A witness to Wilson’s performance during the convention, Dr. Benjamin Rush, called Wilson’s mind “one blaze of light.”

Though not in agreement with all parts of the final, necessarily compromised Constitution, Wilson stumped hard for its adoption, leading Pennsylvania, at its ratifying convention, to become the second state (behind Delaware) to accept the document. His October 6, 1787 speech in the State House courtyard has been seen as particularly important in setting the terms of the ratification debate, both locally and nationally. In particular, it focused on the fact that there would be a popularly elected national government for the first time. He distinguished “three simple species of government” monachy, aristocracy, and “a republic or democracy, where the people at large retain the supreme power, and act either collectively or by representation.” Wilson was later instrumental in the redrafting of the Pennsylvania Constitution of 1776, leading the group in favor of a new constitution, and entering into an agreement with William Findley (leader of the Constitutionalist Party) that limited the partisan feeling that had previously characterized Pennsylvanian politics.

He became the first professor of law at the College of Philadelphia in 1790—only the second at any academic institution in the United States—in which he mostly ignored the practical matters of legal training. Like many of his educated contemporaries, he viewed the academic study of law as a branch of a general cultured education, rather than solely as a prelude to a profession.

Wilson broke off his first course of law lectures in April 1791 to attend to his duties as Supreme Court justice on circuit. He appears to have begun a second-year course in late 1791 or in early 1792 (by which time the College of Philadelphia had been merged into the University of Pennsylvania), but at some unrecorded point the lectures stopped again and were never resumed. They were not published (except for the first) until after his death, in an edition produced by his son, Bird Wilson, in 1804. The University of Pennsylvania Law School in Philadelphia officially traces its foundation to Wilson’s lectures.

James Wilson’s last and final years were marked by financial failures. He assumed heavy debts investing in land that became liabilities with the onset of the Panic of 1796–1797. Of note was the failure in Pennsylvania with Theophilus Cazenove. In debt, Wilson was briefly imprisoned in a Debtors’ Prison in Burlington, New Jersey. His son paid the debt, but Wilson went to North Carolina to escape other creditors. He was again briefly imprisoned, but continued his duties on the Federal judicial circuit. In 1798, he suffered a bout of malaria and then died of a stroke at the age of 55, while visiting a friend in Edenton, North Carolina. He was buried in the Johnston cemetery on Hayes Plantation near Edenton, but was reinterred in 1906 at Christ Churchyard, Philadelphia. “Tracing over the events of Wilson’s life, we are impressed by the lucid quality of his mind. With this went a restless energy and insatiable ambition, an almost frightening vitality that turned with undiminished energy and enthusiasm to new tasks and new ventures. Yet, when all has been said, the inner man remains, despite our probings, an enigma.” – Charles Page Smith

In the lectures mentioned above, James Wilson, among the first of American legal philosophers, worked through in more detail some of the thinking suggested in the opinions issuing at that time from the Supreme Court. He felt, in fact, compelled to begin by spending some time in arguing out the justification of the appropriateness of his undertaking a course of lectures. But he assures his students that: “When I deliver my sentiments from this chair, they shall be my honest sentiments: when I deliver them from the bench, they shall be nothing more. In both places I shall make ― because I mean to support ― the claim to integrity: in neither shall I make ― because, in neither, can I support ― the claim to infallibility.” (First lecture, 1804 Philadelphia ed.)

With this, he raises the most important question of the era: having acted upon revolutionary principles in setting up the new country, “Why should we not teach our children those principles, upon which we ourselves have thought and acted? Ought we to instil into their tender minds a theory, especially if unfounded, which is contradictory to our own practice, built on the most solid foundation? Why should we reduce them to the cruel dilemma of condemning, either those principles which they have been taught to believe, or those persons whom they have been taught to revere?” (First lecture.)

That this is no mere academic question is revealed with a cursory review of any number of early Supreme Court opinions. Perhaps it is best here to quote the opening of Justice Wilson’s opinion in Chisholm v. State of Georgia, 2 U.S. 419 (1793), one of the most momentous decisions in American history: “This is a case of uncommon magnitude. One of the parties to it is a State; certainly respectable, claiming to be sovereign. The question to be determined is, whether this State, so respectable, and whose claim soars so high, is amenable to the jurisdiction of the Supreme Court of the United States? This question, important in itself, will depend on others, more important still; and, may, perhaps, be ultimately resolved into one, no less radical than this ‘do the people of the United States form a Nation?'”

In order to arrive at an answer to this question, one that would provide the foundation for the United States of America, Wilson knew that legal thinkers had to resolve in their minds clearly the question of the difference between “the principles of the constitutions and governments and laws of the United States, and the republics, of which they are formed” and the “constitution and government and laws of England.” He made it quite clear that he thought the American items to be “materially better.”