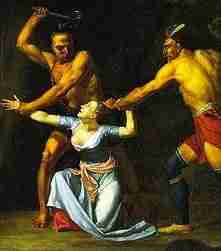 Jane McCrea (sometimes spelled McCrae or MacCrae, 1752 – July 27, 1777) was a young woman who was purportedly slain by Native Americans associated with the British army of Lieutenant General John Burgoyne during the American Revolutionary War. Affianced to a Loyalist serving in Burgoyne’s army, her slaying led to expressions of outrage and an increase in Patriot military recruiting, especially in the days following her killing.

The propaganda that followed greatly accentuated her beauty, and the fact that she was associated with Loyalists (although her family was primarily active in serving the Patriot cause) undermined British claims of protection for Loyalists. Burgoyne’s inability to punish the alleged killers also undermined British assertions that they were more civilized in their conduct of the war; the dissemination of this propaganda contributed to the success of Patriot recruiting drives in New York for several years.

McCrea’s fiancé was reported to be bitter about the affair, and never married. The story of her life and death entered American folklore, and was used by James Fenimore Cooper in The Last of the Mohicans.

Jane McCrea was born one of the younger children in the large family of Rev. James McCrea of New Jersey. Since her mother’s death and her father’s remarriage she had been living with her brother John near Saratoga, New York, where she became engaged to David Jones. When the war began two of her brothers joined the American forces while her fiancé fled with other Loyalists to Quebec. As John Burgoyne’s expedition neared the Hudson River during the summer of 1777, Colonel John McCrea took up his duty with a regiment of the Albany County militia. Jones was serving as a lieutenant in one of the Loyalist militia units accompanying Burgoyne, and was stationed at Fort Ticonderoga after its capture.

McCrea left her brother’s home and was travelling to join her fiancé at Ticonderoga. She had reached the village by the old Fort Edward, but so had the war. She was staying at the home of Sara McNeil, another Loyalist and an elderly cousin to the British General Simon Fraser. On the morning of July 27, 1777, a group of Native Americans, an advance party from Burgoyne’s army led by a Wyandot known as Le Loup or Wyandot Panther, descended on the village of Fort Edward. They massacred a settler and his family, and then killed Lieutenant Tobias Van Vechten and four others when they walked into an ambush. What happened next is a subject of some dispute; what is known is that Jane McCrea and Sara McNeil were taken by the natives and separated. McNeil was eventually taken to the British camp, where either she or David Jones recognized McCrea’s supposedly distinctive scalp being carried by a native.

The traditional version of what happened appears to be based on the account of Thomas Anburey, a British officer. Two warriors, one of whom was Wyandot Panther, were escorting McCrea to the British camp, when they quarreled over an expected reward for bringing her in. One of them then killed and scalped her, and Wyandot Panther ended up with the scalp. Anburey claimed she was taken against her will, but there were also rumors that she was being escorted at her fiancé, David Jones’ request. The second version of the story, apparently advanced by Wyandot Panther under questioning, was that McCrea was killed by a bullet fired by pursuing Americans. James Phinney Baxter, in supporting this version of events in his 1887 history of Burgoyne’s campaign, asserts that an exhumation of her body revealed only bullet wounds, and no tomahawk wounds.

When Burgoyne heard of the killing he went to the Native American camp and ordered the culprit to be delivered, threatening to have him executed. He was told by General Fraser and Luc de la Corne, the agent leading the Native Americans, that such an act would cause the defection of all the Native Americans and might cause them to take revenge as they went back north. Burgoyne relented, and no action was taken against the Indians.

News accounts elaborated on her beauty, describing her as “lovely in disposition, so graceful in manners and so intelligent in features, that she was a favorite of all who knew her”, and that her hair “was of extraordinary length and beauty, measuring a yard and a quarter”. One of the only contemporary accounts by someone who actually saw her was that of James Wilkinson, who described her as “a country girl of honest family in circumstances of mediocrity, without either beauty or accomplishments.” Later accounts embellished on details; historian Richard Ketchum notes that the color of her hair has been described as everything from black to blonde to red; he also cites an 1840s examination of an alleged lock of her hair that described it as “reddish”.

Her death, and those of others in similar raids, inspired some of the resistance to Burgoyne’s invasion leading to his defeat at the Battle of Saratoga. The effect expanded as reports of the incident were used as propaganda to excite rebel sympathies later in the war, especially before the 1779 Sullivan Expedition.

David Jones, apparently bitter over the experience, never married, and settled in Canada as a United Empire Loyalist. The story eventually became a part of American folklore. An anonymous poet wrote “The Ballad of Jane McCrea” that was set to music and became a popular folk song. In Philadelphia in 1799 Ricketts’ Circus performed “The Death of Miss McCrea”, a pantomime co-written by John Durang. John Vanderlyn painted the portrait (shown above) in 1803, and James Fenimore Cooper described similar events in his novel The Last of the Mohicans. There are several markers in and near Fort Edward commemorating her death.

McCrea’s remains have been moved three times. The first time was in 1822, and the second was in 1852 when they were moved to the Union Cemetery in Fort Edward. The body was exhumed again in 2003 in hopes of solving the mystery of her death. Unexpectedly, two bodies—those of McCrea and Sara McNeil—were found in the grave. The 1822 move had placed McCrea’s remains atop the burial vault of McNeil (who died in 1799 of natural causes). The skeletons of both were largely complete, except that McCrea’s skull was missing, possibly due to reported grave-looting in the 19th century. The bodies were exhumed again in 2005 for further analysis, and were this time reburied in separate graves.