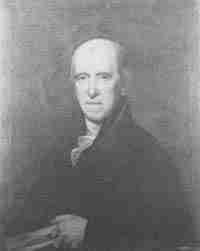 Jared Ingersoll (October 24, 1749 – October 31, 1822) was an early American lawyer and statesman from Philadelphia. He was a delegate to the Continental Congress and signed the U.S. Constitution for Pennsylvania. Ingersoll also served as Pennsylvania state attorney general, 1791–1800 and 1811–1816 and as the United States Attorney for Pennsylvania, 1800-1801.

He joined DeWitt Clinton on the Federalist Party ticket for the U.S. presidential election, 1812, but was defeated by James Madison and Elbridge Gerry.

Jared Ingersoll was a supporter of the Revolutionary cause. His training as a lawyer convinced him that the problems of the newly independent states were caused by the inadequacy of the Articles of Confederation. He became an early and ardent proponent of constitutional reform, although, like a number of his colleagues at the Constitutional Convention, he believed this reform could be achieved by a simple revision of the Articles. Only after weeks of debate did he come to see that a new document was necessary. Ironically, his major contribution to the cause of constitutional government came not during the Convention, but later during a lengthy and distinguished legal career when he helped define many of the principles enunciated at Philadelphia.

===Career before the Constitutional Convention===

Born in New Haven, Connecticut, Ingersoll was the son of Jared Ingersoll (1722–1781), a prominent British official whose strong Loyalist sentiments would lead to his being tarred and feathered by radical Patriots.

In 1765, the year the Stamp Act was imposed on the colonies in America, the British Crown appointed the elder Jared Ingersoll as Stamp Master, the colonial agent in London, for the colony of Connecticut. As the next few months passed and animosity over the Stamp Act grew, Ingersoll became the most hated man in the Colony. On August 21 of that year the Sons of Liberty hung his effigy in New London, Connecticut and in Norwich, Virginia. He wrote an account of Isaac Barre’s speech made during the Parliamentary debate on the Stamp Act to the governor of Connecticut, Thomas Fitch. He would later be involved in a controversial role as the agent who enforced the resulting Stamp Act in Connecticut.

The younger Ingersoll completed Hopkins Grammar School in New Haven in 1762, graduated from Yale College in 1766, studied law in Philadelphia, and was admitted to the Pennsylvania bar in 1773. Although by training and inclination a Patriot sympathizer, the young Ingersoll shied away from the cause at the outset because of a strong sense of personal loyalty to his distinguished father. On his father’s advice, he sought to escape the growing political controversy at home by retiring to London to continue his study of the law at the Middle Temple School (1773–76) and to tour extensively through Europe. He spent more than eighteen months in Paris, where he formed the acquaintance of Benjamin Franklin.

Shortly after the colonies declared their independence, Ingersoll renounced his family’s views, made his personal commitment to the cause of independence, and returned home. In 1778 he arrived in Philadelphia as a confirmed Patriot. With the help of influential friends he quickly established a flourishing law practice, and shortly after he entered the fray as a delegate to the Continental Congress (1780–81). In 1781 Ingersoll married Elizabeth Pettit. Always a supporter of strong central authority in political affairs, he became a leading agitator for reforming the national government in the postwar years, preaching the need for change to his friends in Congress and to the legal community.

===Contributions to the Constitutional Convention===

At the Convention, Ingersoll was counted among those who favored revision of the existing Articles of Confederation, but in the end he joined with the majority and supported a plan for a new federal government. Despite his national reputation as an attorney, Ingersoll seldom participated in the Convention debates, although he attended all sessions.

===Career after the Constitutional Convention===

Once the new national government was created, Ingersoll returned to the law. Except for a few excursions into politics—he was a member of Philadelphia’s Common Council (1789), and, as a stalwart Federalist who considered the election of Thomas Jefferson in 1800 a “great subversion,” he ran unsuccessfully for Vice President on the Federalist ticket in 1812—his public career centered on legal affairs. He served as attorney general of Pennsylvania (1790–99 and 1811–17), as Philadelphia’s city solicitor (1798–1801), and as U.S. district attorney for Pennsylvania (1800–1801). For a brief period (1821–22), he sat as presiding judge of the Philadelphia district court.

Ingersoll’s major contribution to the cause of constitutional government came not during the Convention, but later during a lengthy and distinguished legal career, when he helped define many of the principles enunciated at Philadelphia. He made his contributions to the Constitutional process through several Supreme Court cases that defined various basic points in Constitutional law during the beginning of the new republic. In one definitive case he represented Georgia in Chisholm v. Georgia (1793), a landmark case in states’ rights. Here the court decided against him, ruling that a state may be sued in federal court by a citizen of another state. This reversal of the notion of state sovereignty was later rescinded by the Eleventh Amendment to the Constitution. In representing Hylton in Hylton v. US (1796), Ingersoll was also involved in the first legal challenge to the constitutionality of an act of Congress. In this case, the Supreme Court upheld the government’s right to impose a tax on carriages. Ingersoll also served as counsel in various cases that helped clarify constitutional issues concerning the jurisdiction of federal courts and U.S. relations with other sovereign nations, including defending Senator William Blount of Tennessee against impeachment.

Jared Ingersoll died in Philadelphia at the age of 73 and was survived by three children; interment was in the Old Pine Street Presbyterian Church Cemetery, Fourth and Pine Streets. Ingersoll Street in Madison, Wisconsin is named after Jared Ingersoll.