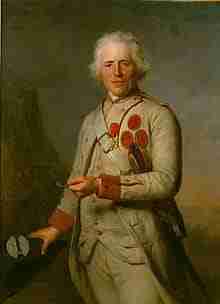 Jean Thurel (or Jean Theurel; 6 September 1698{spaced ndash}10 March 1807) was a fusilier of the French Army with an extraordinarily long career that spanned over 90 years of service in the Touraine Regiment. Having been born during the reign of Louis XIV and died during that of Napoleon I, Thurel lived in three different centuries and served three different monarchs.

Thurel was born in Orain, Burgundy. He enlisted on 17 September 1716 in the Régiment de Touraine, at the age of 18. He served there for over 90 years without interruption, under Louis XV, Louis XVI, the Republic and the Empire.

Thurel was severely wounded in battle on two occasions. In 1733, during the siege of Kehl, he was shot in the chest with a musket. At the battle of Minden in 1759, he received seven sword slashes, including six to the head. Three of his brothers were killed in the battle of Fontenoy in 1745. One of Thurel’s sons was a corporal and a veteran in the same company; he died at the Battle of the Saintes, a naval battle that occurred on 12 April 1782 off the coast of Dominica, West Indies during the American campaign.

A well-disciplined soldier of the line infantry, Thurel was only admonished once during his entire career, during the 1747 Siege of Bergen as the French troops occupied the citadel. He was admonished because, the doors of the fortress being shut, he scaled its walls to gain entry so that he would not miss muster. Another example of Thurel’s discipline and physical fitness occurred in 1787. When his regiment was ordered to march to the coast to embark on ships of the French Navy, he was given the opportunity to travel in a carriage due to his advanced age. The 88-year-old Thurel refused the offer and marched the entire distance on foot, stating that he had never before traveled by carriage and had no intention of doing so at that time. His humility is evident in his steadfast refusal to accept any promotions; he remained a low-ranking fusilier for his entire military career.

In hopes of improving re-enlistment rates, Louis XV established the Médaillon Des Deux Épées (Medal of the Two Swords) by a royal decree in 1771. This was the first military decoration in France for which an enlisted man could be eligible. This medal was initially awarded to soldiers who had served in the French Army, as a reward for their longevity of service. The decree was extended in 1774 so that sailors of the French Navy were also eligible to receive the medal. A soldier or sailor would have to serve for 24 years to be eligible for the Médaillon Des Deux Épées. Thurel was awarded two Médaillon Des Deux Épées in 1771, the year the medal was established, in recognition of the two 24-year periods of time (1716–1740 and 1740–1764) during which he had served up until then.{Citation needed|date=July 2011}

On 8 November 1787, Thurel was presented to the royal court at the Palace of Versailles. The 33-year-old king of France addressed the 88-year-old Army private in a respectful manner as “father”, and asked whether Thurel would prefer to be awarded the Ordre Royal et Militaire de Saint-Louis (Royal and Military Order of Saint Louis) or a third Médaillon Des Deux Épées medal, in recognition of the period from 1764–1788. This was a highly unusual request—not only because enlisted men and non-commissioned officers were not normally eligible to receive the Ordre Royal et Militaire de Saint-Louis, which was reserved for commissioned officers of the Army or the Navy—but also because Thurel still had four more months of military service to complete before being eligible for a third Médaillon Des Deux Épées medal. Thurel opted to receive a third Médaillon Des Deux Épées, on the condition that the king himself attach the medal to his uniform. Louis XVI granted Thurel his wish. The Comte d’Artois offered Thurel his sword, and the ladies of the court put a carriage at his disposal during his stay in the Paris area. The king also granted Thurel an annual pension of 300 livres. Very few men have completed the 48 years of military service required to receive a second medal. Thurel is the only one ever to have received it three times.

On 26 October 1804, at the age of 106, Thurel became one of the first recipients of the newly established Ordre National de la Légion d’Honneur (National Order of the Legion of Honor), the highest decoration in France. Napoleon I also rewarded him with a pension of 1,200 francs. He was later appointed as the “oldest soldier of Europe”. He remained healthy in body and spirit throughout his remarkably long life. He died in Tours on 10 March 1807, at the age of 108, after a brief illness.