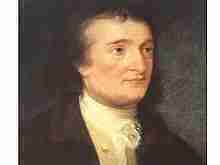 Jeremiah Townley Chase (May 23, 1748 – May 11, 1828) was an American lawyer and jurist from Annapolis, Maryland. He served as a delegate for Maryland in the Continental Congress of 1783 and 1784, and for many years was chief justice of the state’s court of appeals.

Chase was born in Baltimore, Maryland, to Richard and Catherine Chase. When both his parents died in 1757 he was adopted by his uncle Thomas Chase, who was the Anglican rector of St. Paul’s parish in Annapolis. (St. Paul’s later became part of the American Episcopal Church.) His uncle also took over his education as he had done earlier for his own son, Samuel Chase.

When Jeremiah Chase was a young man, he followed his cousin Samuel Chase to Annapolis. He read law in Samuel’s office and was admitted to the bar of Anne Arundel County in 1771. Chase established a practice in both Annapolis and Baltimore, which he continued in Annapolis until 1791 with interruptions for public service. He never went into practice with his cousin but they made several appearances in court for the same clients, and a few as opponents. There were several young men who studied law with both cousins, especially when one was out of town. This list of men included Roger Taney who was later Chief Justice of the United States.

Chase’s adopted father, Rev. Chase, died in 1779 and after that Jeremiah moved fully to Annapolis. That same year he was named a member of Maryland’s Executive Council, which functioned as the upper house of the legislature, and he would serve there until 1788. Chase was also Mayor of Annapolis in 1783 and 1784. Those same years he served as a delegate to the Continental Congress, which held sessions for those years in Annapolis.

In 1788 Chase was a delegate to the Maryland convention called to ratify the United States Constitution. He was among those opposed to its adoption, believing that a Bill of Rights should be included. When the Bill of Rights was formally adopted by Congress in 1789, Chase generally became a supporter of the Federalist Party.

Despite his opposition to the Constitution, Chase was named as a justice in the state’s General Court for Anne Arundel County in 1789 and served there until 1805. In 1808 he was appointed chief judge to the state’s supreme court, the Maryland Court of Appeals, for the third district. He served on that court until he resigned for health reasons in 1826.

Chase had married Hester Baldwin on June 24, 1779. They remained together until her death in 1823 and had five children: Richard, Frances, Hester, Matilda, and Catherine. After his marriage he rented a wing of the Hammond House from Matthias Hammond which served as home for the rest of his life. When Chase died at home in 1828, he was buried in the City Cemetery in Annapolis.

The Hammond-Harwood House still stands on Maryland Avenue at King George Street in Annapolis. The home is operated as a museum and is open to visitors, although a fee is charged.