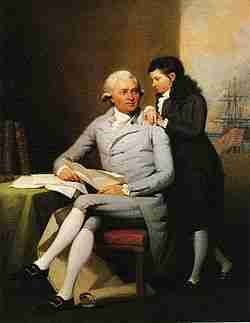 Jeremiah Wadsworth (July 12, 1743– April 30, 1804) was an American sea captain, merchant, and statesman from Hartford, Connecticut who profited from his position as a government official charged with supplying the Continental Army. He represented Connecticut in both the Continental Congress and the United States House of Representatives.

He was a descendant of William Wadsworth, one of the founders of Hartford and a pastor of the town’s Center Congregational Church. He went to sea in 1761 at the age of 18 for health reasons, starting as a regular sailor on one of his uncle’s ships. He rose to become first mate of a vessel and eventually a captain who made his fortune in the West India trade.

==During the American Revolution==

When the war started, Wadsworth was appointed to a committee charged with buying 5,000 pairs of yarn stockings for the army (which had already been sent to Canada). He served on another committee to procure 1,800 pounds of “lawful money in specie” in exchange for bills for use by the army. The Connecticut General Assembly later commissioned him and Col. Jonathan Fitch to find a large number of tin kettles for the army. The next assignment was to buy up as much pork as he could (both to furnish the American army and to keep it out of the hands and stomachs of the British forces).

Having served effectively in these assignments in Connecticut, Congress elected him Deputy Commissary General of Purchases on June 17, 1777, but he resigned in August. When Congress reorganized the supply system, he became Commissary General in April 1778, resigneing in December 1779.

Reaching the rank of colonel, he became commissary for Comte de Rochambeau’s army until the war’s end. In the summer of 1783, he went to Paris to report to the French on his activities.

He is said to have turned a good profit for himself in his transactions for supplies.

Wadsworth was a good friend of Nathanael Greene and during the time Greene was Quarter-master General they formed some investment partnerships. After Greene’s death in 1786 Jeremiah was both an adviser and suspected married lover to the widow Caty Greene.

Wadsworth became a “pioneer in banking, insurance, and the breeding of cattle” after the war, according to historian North Callahan.

He was appointed Treaty Commissioner, by George Washington, at the Treaty of Big Tree between the U.S. and the Seneca nation in 1797.

He died in Hartford, Conn., April 30, 1804, and is interred in the Ancient Burying Ground.