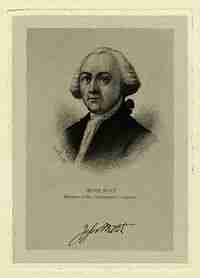 An obituary from the Connecticut Courant (Hartford, CT) of April 9, 1822, reads: “DIED–At his seat in Coventry, on the 29th ult. the Hon. JESSE ROOT, at the age of eighty-five. His life was actively employed for the benefit of his country, and his death is an era in the history of the land he lived in. In 1777, he joined the continental army in Peekskill, as a Colonel. At the recommendation of its illustrious commander, he was appointed Adjutant-General to the Conn. Line. In May 1779, he was a member of Continental Congress, in which he continued until the peace of 1783. He was appointed a Judge of the Superior Court of this State in May 1790, and Chief Justice in 1796. He continued in these offices until the year 1807, when at the age of seventy he retired from the bench. The Convention of 1819 may claim him as one of their members. The last public service of his life, was the tribute of an old man’s veneration for the Charter that his Fathers rescued and enjoined on their sons to defend. Justice relied on his talents, Liberty approved his patriotism, and Religion shed her light upon the Piety of his Life. But the silver cord is loosed, the golden bowl is broken, the pitcher is broken at the fountain, and the wheel at the cistern ; the dust has returned to the dust as it was, and the spirit has ascended upon God who gave it.”