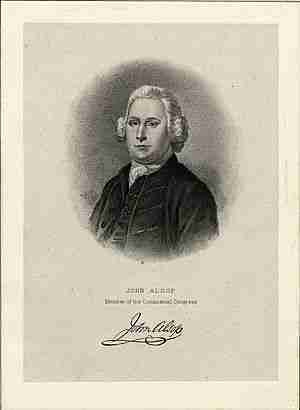 John Alsop (1724 – November 22, 1794) was an American merchant and politician from New York City during the American Revolution. He was a delegate for New York to the Continental Congress from 1774 to 1776.

John Alsop, born in 1724 in New Windsor, Orange County, New York. He was the son of John Alsop, Sr., a lawyer first of New Windsor, New York, where he was largely interested in real estate. A few years later he removed to New York City and there practiced his profession for many years. He was a son of Capt. Richard Alsop and Hannah Underhill (December 2, 1666 – August 23, 1757) the daughter of Captain John Underhill (c. 1609 – September 21, 1672) and Elizabeth Feake, who was the daughter of Lt. Robert Feake and Elizabeth Fones.

Captain Richard Alsop first settled in New York during the 1650s. He had served as a major in Oliver Cromwell’s army, but after a disagreement with the Lord Protector, he fled to the obscurity of colonial life.

As a young man he moved to New York City and entered the mercantile world with his brother Richard. The brothers became importers and merchants in cloth and dry goods. Their enterprise prospered, and the Alsops, for several generations, became one of the great merchant houses of the city. With the business secure, John became interested in civic and political activities. He was elected by New York County to serve in the Province of New York Assembly. He was one of the civic leaders that incorporated the New York Hospital Association, and served as its first governor from 1770 to 1784.

Mary Alsop married Rufus King in New York City on March 30, 1786, he being at that time a delegate from Massachusetts to the Continental Congress then sitting in that city. Mrs. King was a lady of remarkable beauty, gentle and gracious manners, and well-cultivated mind.

Their nephew was Richard Alsop, one of The Hartford Wits (also called the Connecticut Wits) who were a group of American writers centered around Yale University and flourished in the 1780s and 1790s.

Their grand nephews were the brothers, Joseph Alsop and Stewart Alsop, both American newspaper journalists and political analysts.

During the first phases of the American Revolution, the Province of New York Assembly could not reach a conclusion about the Continental Congress. As a result, delegates were selected by the revolutionary committees in each county. In 1774, John Alsop, along with James Duane, John Jay, Philip Livingston, and Isaac Low were named by several counties, extending from Long Island to Albany. When the Congress convened on September 5, it accepted these credential when John Jay presented them. Alsop wasn’t able to attend until he arrived in Philadelphia on September 14.

As the revolution escalated in 1775, John Alsop was one of the leaders of the Committee of Sixty which became the provisional government in New York City. He actively supported the non-importation agreements that he had signed the previous October in the Congress, despite the costs to his business. He was active in recruiting militia and in efforts to equip and arm them. As the Assembly continued to refuse to recognize the national Congress, he was elected to the alternative revolutionary New York Provincial Congress, and they in turn returned him to the second Continental Congress.

1776 was a critical year in the struggle for New York. Alsop began the year at Philadelphia, in a session of Congress. He made several trips between there and New York, acting as an agent of congress through his business to acquire supplies, and particularly powder for the Continental Army. After General Washington visited Congress in late May, Alsop returned with him to New York in early June. He added efforts to find housing for 8,000 Continental Army troops to his earlier and continuing work on the supply problems. When his home in Newtown was captured by the British in August, he kept working from Manhattan. By September the British had occupied Manhattan as well, ending his effective contributions to the revolution. He escaped to Middletown, Connecticut and remained until the British occupation ended in 1783.

After the war he worked to help rebuild the family business, and again became active as a civic leader. He was president of New York City’s Chamber of Commerce in 1784 and 1785. He died at his home in Newtown, Queens County, New York on November 22, 1794 and is buried in Trinity Church Cemetery on Manhattan.

John Alsop’s descendants number in the thousands today. Some of his notable descendants include;

* Dr. C. Loring Brace IV, noted Biological anthropologist.
* Gerald Warner Brace (1901–1978) was an American writer, educator, sailor and boat builder.
* Charles Loring Brace (1826–1890) was a philanthropist and was most renowned for founding the Children’s Aid Society.
* David Crosby, is an American guitarist, singer, and songwriter. He was a founding member of three bands: The Byrds, Crosby, Stills & Nash and CPR (band).
* Floyd Crosby, was an award winning American cinematographer.
* Wolcott Gibbs, was an American editor, humorist, theater critic, playwright and author of short stories.
* Archibald Gracie III, was a career United States Army officer, businessman, and a graduate of West Point. He is well known for being a Confederate brigadier general during the American Civil War and for his death during the Siege of Petersburg.
* Archibald Gracie IV, was an American writer, amateur historian, real estate investor, and survivor of the sinking of the RMS Titanic.
* Fleet Admiral William Frederick Halsey, Jr., USN, (called “Bill Halsey” and sometimes known as “Bull” Halsey), was a U.S. Naval officer and the commander of the United States Third Fleet during part of the Pacific War against Japan. Earlier, he had commanded the South Pacific Theater during desperate times.
* Isabella Beecher Hooker (1822–1907) was a leader in the women’s suffrage movement and an author.
* Charles King (academic), was an American academic, politician, newspaper editor and the ninth president of Columbia College (now Columbia University).
* Charles King, was a United States soldier and a distinguished writer.
* James G. King, was an American businessman and Whig Party politician who represented New Jersey’s 5th congressional district in the United States House of Representatives. His daughter, Frederika Gore King, married Bancroft Davis.
* John Alsop King, was an American politician who served as governor (1857–1859) of New York.
* Rufus King, was a newspaper editor, educator, U.S. diplomat, and a Union brigadier general in the American Civil War.
* Rufus King, Jr., was an artillery officer in the Union Army during the American Civil War, and a Medal of Honor recipient.
* Ellin Travers Mackay, 2nd wife of composer and lyricist, Irving Berlin.
* Alice Duer Miller, was an American writer and poet.
* Halsey Minor is a technology entrepreneur who founded CNET in 1993.
* Mary Alsop King Waddington, was an American author.
* Jane Wyatt, was an American actress perhaps best known for her role as the housewife and mother on the television series Father Knows Best and as Amanda Grayson, the human mother of Spock on the science fiction television show, Star Trek. 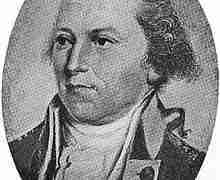