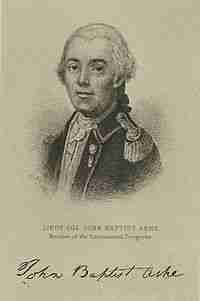 John Baptista Ashe (1748 – November 27, 1802) was an American planter, soldier, and statesman from North Carolina. He was born in Rocky Point township of Pender County, North Carolina in 1748, the son of Samuel Ashe and his first cousin Mary Porter Ashe. During the American Revolutionary War, he served in the North Carolina Line of the Continental Army, rising to the rank of lieutenant colonel. He was at Valley Forge and fought in the Battle of Eutaw Springs.

In 1802, the North Carolina General Assembly elected Ashe Governor, but he died before he could take office. He is buried in Halifax.

His namesake and nephew, John Baptista Ashe, served in Congress as a Representative from Tennessee.