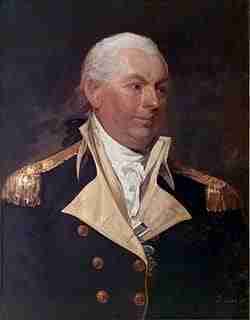 After the war, he became America’s first commissioned naval officer, at the rank of Commodore, receiving his commission from President George Washington in 1797.

Barry was born on March 25, 1745, in Tacumshane, County Wexford, Ireland. Barry’s family was driven from their ancestral home by the British.

Barry received his first captain’s commission in the Continental Navy on March 14, 1776, signed by John Hancock, president of the Continental Congress. Barry was a religious man and began each day at sea with a reading from the Bible. He had great regard for his crew and their well being and always made sure they were properly provided for while at sea.

In 1777 Barry commanded the ship USS Delaware, a brig sailing under a letter of marque capturing English vessels in the Delaware river.

In 1778 Barry assumed command of the USS Raleigh, capturing three prizes before being run aground in action on September 27, 1778. Her crew scuttled her, but she was raised by the British who refloated her for further use in the Royal Navy.

Captain Barry was given command of USS Lexington, of 14 guns, on December 7, 1775. It was the first commission issued by the Continental Congress. The Lexington sailed March 31, 1776. On April 7, 1776, off the Capes of Virginia, he fell in with the Edward, tender to the British man-of-war {HMS|Liverpool|1758|6}, and after a desperate fight of one hour and twenty minutes captured her and brought her into Philadelphia.

On June 28, Pennsylvania’s brig Nancy arrived in the area with 386 barrels of powder in her hold and ran aground while attempting to elude British blockader {HMS|Kingfisher|1770|2}. Barry ordered the precious powder rowed ashore during the night leaving only 100 barrels in Nancy at dawn. A delayed action fuse was left inside the brig, which exploded the powder just as a boatload of British seamen boarded Nancy. This engagement became known as the Battle of Turtle Gut Inlet.

Barry continued in command of Lexington until October 18, 1776, and captured several private armed vessels during that time.

He and his crew of the USS Alliance fought and won the final naval battle of the American Revolution off the coast of Cape Canaveral on March 10, 1783. He was seriously wounded on May 29, 1781, while in command of Alliance during her capture of HMS Atalanta and Trepassey. Barry was successful in suppressing three mutinies during his career as an officer in the Continental Navy.

John Barry was once offered 100,000 British pounds and command of any frigate in the entire British Navy if he would desert the American Navy. Outraged at the offer, Captain Barry responded that not all the money in the British treasury or command of its entire fleet could tempt him to desert his adopted country.

Appointed senior captain upon the establishment of the U.S. Navy, he commanded the frigate United States in the Quasi-War with France. Barry authored a signal book published in 1780 to improve communications at sea among vessels traveling in formation.

On February 22, 1797, he was issued Commission Number 1 by President George Washington, backdated to June 4, 1794. His title was thereafter “Commodore.” He is recognized as not only the first American commissioned naval officer but also as its first flag officer.

Barry’s last day of active duty was March 6, 1801, when he brought the USS United States into port, but he remained head of the Navy until his death on September 12, 1803, from asthma. Barry died childless.

Barry died at Strawberry Hill, in present-day Philadelphia on September 13, 1803, and was buried in the graveyard of Old St. Mary’s Roman Catholic Church in Center City, Philadelphia.

On October 24, 1768, Barry married Mary Cleary, who died in 1774. On July 7, 1777, he married Sarah Austin, daughter of Samuel Austin and Sarah Keen of New Jersey. Barry had no children, but he helped raise Patrick and Michael Hayes, children of his sister, Eleanor, and her husband, Thomas Hayes, who both died in the 1780s.

* Commodore John Barry stands in Franklin Square (Washington, D.C.).
* A large statue of Barry stands directly in front of the formal entrance to Independence Hall in Philadelphia, PA.
* A statue of Barry overlooks the Crescent Quay in Wexford town in Ireland. It was a gift to the town from the United States and was delivered by a United States Navy Destroyer USS John R. Pierce (DD-753). The statue was unveiled in 1956, and each year a parade and wreath-laying ceremony takes place at the statue to celebrate “Barry Day”, commemorated by the Irish Naval Service and the Minister for Defence.