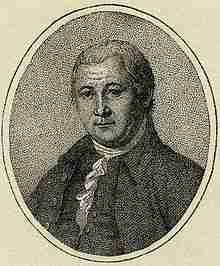 John Bubenheim Bayard (11 August 1738 – 7 January 1807) was a merchant, soldier, and statesman from Philadelphia, Pennsylvania. He was a delegate for Pennsylvania to the Continental Congress in 1785 and 1786, and later mayor of New Brunswick, New Jersey.

Bayard’s family were French Huguenots who escaped France through the Netherlands. His ancestor, Samuel Bayard married Ann Stuyvesant there. After his death, she brought their four children to New Netherland with her brother Peter Stuyvesant in 1647. In 1698, their grandson Samuel Bayard (1675–1721) moved to Maryland and established a plantation known as Bohemia Manor in Cecil County, Maryland. It remained the seat for several new generations of the Bayard family.

John entered the business world in the counting-room of a merchant, John Rhea. He began making his own investments in voyages, prospered, and became one of the leaders in the merchant community. When he joined his own firm, it was named Hedge & Bayard. In 1765 he signed the non-importation agreement in protest of the Stamp Act, even though it hurt his own business. By 1766, he had become one of the leaders of the Philadelphia Sons of Liberty.

Bayard was elected to the convention of Pennsylvania in July 1774, and re-elected in 1775. This group was originally the revolutionary counter to the official assembly, but eventually replaced it as the legislature for the new government. When regiments were raised for the defense of Philadelphia in 1775, John became Colonel of the second regiment. In 1776, when the convention had become a constitutional assembly, he was named to the Committee of Safety. In March 1777, he became a member of the state’s Board of War, and the Speaker of the Pennsylvania Assembly, and was re-elected in 1778.

In the meantime, Hedge & Bayard became one of the firms under contract with the Continental Congress to supply the Continental Army. John himself fitted out a ship sent out as a privateer. But, in the fall of 1777, the British occupied Philadelphia. Bayard moved his family to a farm at Plymouth, and took to the field with his regiment. They fought at the Battles of Brandywine, Germantown, and Princeton. John was cited by General Washington for his gallant leadership in the Battle of Princeton.

In 1781 Bayard became head of the Board of War, and as such joined the state’s Executive Council. Under Pennsylvania’s 1776 constitution this was a kind of combination of the roles of a governor’s cabinet and the state Senate. Then in 1785 he was elected to the Continental Congress. He served there in 1785 and 1786, attending their meetings in New York.

By 1788 Bayard had settled most of the debts he had run up during the war. He was forced to sell the estate in Maryland to another branch of the family, and closed down his Philadelphia business. He built a new home in New Brunswick, New Jersey and moved there looking to retire. But in 1790, he was elected mayor of New Brunswick. Then, for many of his remaining years he sat as the judge in the court of common pleas for Middlesex County. He died at home in New Brunswick, New Jersey on January 7, 1807 and is buried in the First Presbyterian Churchyard there.