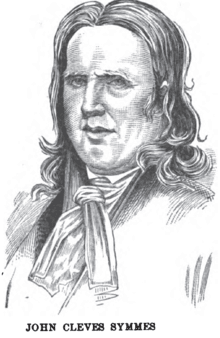 John Cleves Symmes (July 21, 1742 – February 26, 1814) was a delegate to the Continental Congress from New Jersey, and later a pioneer in the Northwest Territory. He was also the father-in-law of President William Henry Harrison (and therefore the great-grandfather of President Benjamin Harrison).

Symmes supported the revolution, becoming chairman of the Sussex County, New Jersey Committee of Safety in 1774. When the Revolutionary war began in earnest, he served as Colonel of the 3rd Regiment of the Sussex County militia from 1777 to 1780. The unit was called into service with the Continental Army on several actions.

In 1776, he was elected to the New Jersey Legislative Council (now the New Jersey Senate); he was also a member in 1780. Symmes served on the New Jersey Supreme Court in 1777 and 1778. He was a frequent visitor to Governor William Livingston both in Elizabethtown and in Parsippany. In 1779, John married Livingston’s daughter, Susannah. Besides being the governor’s daughter, she was John Jay’s sister-in-law.

Symmes represented New Jersey in the Continental Congress (1785–1786), then, in 1788, moved to the west, settling in what later became North Bend, Ohio. He served as a judge of the Territorial Court from 1788 until Ohio became a state in 1803. He also pursued an active career as a land developer and seller. He died on February 26, 1814 at Cincinnati, Ohio, and is buried at Congress Green Cemetery in North Bend, Ohio.

Symmes bought {convert|311682|acre|km2} from the Congress in 1788. President George Washington signed the patent on October 30, 1794 conveying to Symmes 248,250 acres (1,005 km²) plus a surveying township of 23,040 acres (93 km²), in trust, for an academy. This land was known as the Symmes Purchase, and was the cause of considerable controversy in his lifetime and after. The purchase price was $225,000, and was paid in notes issued by the Congress to raise money during the war. There is no doubt that a considerable part of this amount came from Symmes in the first place as he lent most of his own money to the revolution.

There were other investors who served as partners in the transaction. There is also no doubt that some of these notes were purchased from other holders, probably at a discount. This was before the rampant speculation in these notes that happened a few years later, but is still questionable.

There were also disputes about the actual boundaries of the purchase and the quality of surveying and validity of titles. In the last years of his life, he spent a great deal of time in court, defending himself from claims.

Symmes’ nephew and namesake John Cleves Symmes, Jr. fought in the War of 1812 and is best known for his Hollow Earth Theory.

Miami University’s Symmes Hall was named in his honor in 1949. Symmes Hall is located on East Quad near Erickson Dining Hall on the university’s Oxford, Ohio campus and is currently being used a residence hall for first-year undergraduate students.