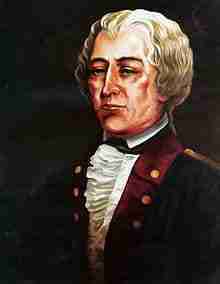 John Doughty (July 25, 1754 – September 16, 1826) was an American military officer who briefly served as the senior officer of the United States Army in 1784. Born in New York City on July 25, 1754, he graduated from King’s College (Columbia University) in 1770 and entered military service through New Jersey state channels in January 1776.

He served as adjutant general of two Morris County battalions and was appointed captain lieutenant of the New Jersey Eastern Artillery Company in March 1776. Doughty became a captain of the 2nd Continental Artillery Regiment in January 1777 and served as an aide-de-camp to Major General Philip Schuyler. Later, he was assigned to command the New York State Artillery Company in March 1777.

John Doughty would participate in the battles of Brandywine (1777), Germantown (1777), Monmouth (1778), Springfield (1780), and Yorktown (1781). He was appointed brigade major of the Corps of Artillery in 1779 and was appointed fort major for the West Point garrison in 1782. He was transferred to the Corps of Artillery in June 1783. He was promoted to brevet major in September, and became the Army’s senior ranking officer following the discharge from the army of all but eighty men in June 1784 {Doughty’s Artillery Company attached to Henry Jackson’s 1st American Regiment (1783-1784)} and continued serving as senior officer of the United States Army until 12 August 1784. He superintended the construction of Fort Harmar (1785) and Fort Washington (1789) on the Ohio frontier.

Doughty was designated major commandant of the Battalion of Artillery in September 1789, then was dispatched by President Washington to the frontier to negotiate with the Choctaw Nation for trading post sites in 1789. He repelled with serious losses an attack by Cherokee, Shawnee, and Creek Indians while leading a detachment up the Tennessee River on a negotiating mission to the Chickasaw Nation in 1790. He declined an appointment to lieutenant colonel of the 2nd Infantry Regiment, after which he retired from the army in March 1791. He then was appointed brigadier general of artillery, 2d Division, New Jersey militia in 1793 and was appointed lieutenant colonel, 2d Regiment of Artillerists and Engineers, as war with France threatened in June 1798. In May 1800 Doughty resigned and returned to private life on his estate at Morristown, New Jersey, to engage in agriculture and pursue literary studies. He died there on September 16, 1826.