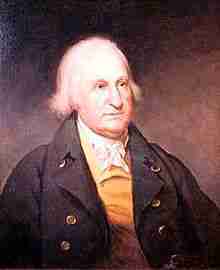 John Eager Howard (June 4, 1752{spaced ndash}October 12, 1827) was an American soldier and politician from Maryland. He was elected as governor of the state in 1789, and served three one-year terms. He also was elected to the Continental Congress, the Congress of the United States and the U.S. Senate. He was born in and died in Baltimore County. Howard County, Maryland, is named for him.

He was the son of Cornelius Howard and Ruth (Eager) Howard, of the Maryland planter elite and was born at their plantation “Belvedere,” which he inherited after their deaths. Howard grew up in an Anglican slaveholding family. Anglicanism was the established church of the Chesapeake Bay colonies.

Howard joined the Baltimore lodge of Freemasonry and eventually became a Brother.

Commissioned a captain at the beginning of the American Revolutionary War, Howard rose in 1777 to the rank of colonel in the Continental Army, fighting in the Battle of White Plains and in the Battle of Monmouth. He was awarded a silver medal by Congress for his leadership at the 1781 Battle of Cowpens, during which he commanded the 3rd Maryland Regiment, Continental Army. In September 1781, he was wounded in a bayonet charge at the Battle of Eutaw Springs.

Following his army service, Howard held several electoral political positions: elected to the Continental Congress of 1788; Governor of Maryland for three one-year terms, 1789 through 1791; State Senator from 1791 through 1795; and Presidential Elector in 1792. He declined the offer from President George Washington in 1795 to be Secretary of War. He joined the Federalist Party and was elected to the 4th Congress from November 30, 1796, through 1797 as a United States Senator for the remainder of the term of Richard Potts, who had resigned. He was elected for a Senate term of his own in 1797, which included the 5th Congress, the 6th Congress of 1799-1801 during which he was President pro tempore, and the 7th Congress, serving until March 3, 1803.

After 1803, Howard returned to Baltimore, where he avoided elected office but continued in public service and philanthropy as a leading citizen. In the 1816 presidential election, he received 22 electoral votes for Vice President as the running mate of Federalist Rufus King, losing to James Monroe and Governor Daniel Tompkins. No formal Federalist nomination had been made, and it is not clear whether Howard, who was one of several Federalists who received electoral votes for Vice President, ran as a candidate for the office.

Although Howard was offered an appointment as the Secretary of War in the administration of President George Washington, he declined it. Similarly, he declined a 1798 commission as Brigadier General during the preparations for the coming Quasi-War with France.

Howard developed the property “Waverley” at Marriottsville, Maryland for George. George Howard became a politician and was elected as governor forty years after his father’s term, and four years after his death.{Citation needed|date=June 2009} Their second son, Benjamin Chew Howard, was also a prominent politician in Maryland, elected for four terms in the U.S. Congress. A grandson, Francis Key Howard, was a notable figure in Maryland at the start of the American Civil War.

* Howard County, Maryland, formed out of western Anne Arundel County and southeastern Frederick County in 1839 as the Howard District and officially as Howard County in 1851, was named for him.
* In 1904, the city commissioned an equestrian statue of Howard by the eminent French sculptor Emmanuel Frémiet and installed it at Washington Monument circle facing south overlooking at Washington Place Square of North Charles Street, Baltimore.
* Howard is one of several notable men of Maryland mentioned in the state song “Maryland, My Maryland” written 1861 by James Ryder Randall as “Howard’s war-like thrust”.