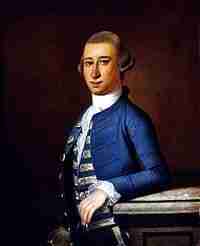 John Habersham (December 23, 1754 – December 17, 1799) was an American merchant, planter, and soldier from Georgia. He was the son of loyalist official James Habersham and the younger brother of patriot leader Joseph Habersham. He served as an officer in the 1st Georgia Regiment during the American Revolutionary War. He was a delegate to the Congress of the Confederation in 1785.