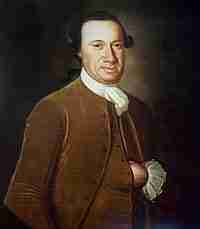 John Hanson ({OldStyleDate|April 14|1721|April 3} – November 15, 1783) was a merchant and public official from Maryland during the era of the American Revolution. After serving in a variety of roles for the Patriot cause in Maryland, in 1779 Hanson was elected as a delegate to the Continental Congress. He signed the Articles of Confederation in 1781 after Maryland finally joined the other states in ratifying them.

Little is known about Hanson’s early life; he was presumably privately tutored as was customary among the gentry of his time and place.{sfn|Levering|1976|p=114} He followed his father’s path as a planter, slave owner, and public official. He was often referred to as John Hanson, Jr., to distinguish him from an older man of the same name. About 1744 he married Jane Contee (1728–1812), with whom he would have eight children.{sfn|Stiverson|2000}{sfn|Papenfuse|1979} Their son Peter Contee Hanson (1758–1776){sfn|Papenfuse|1979} died in the battle of Fort Washington during the American Revolutionary War. Their oldest son Alexander Contee Hanson, Sr. (1749–1806) was a notable essayist.{sfn|Chaney|2000} Alexander Hanson is sometimes confused with his son, Alexander Contee Hanson, Jr. (1786–1819), who became a newspaper editor and US Senator.

Hanson’s career in public service began in 1750, when he was appointed sheriff of Charles County.{sfn|Stiverson|2000} In 1757 he was elected to represent Charles County in the lower house of the Maryland General Assembly, where he served over the next twelve years, sitting on many important committees.{sfn|Stiverson|2000} Maryland was a proprietary colony, and Hanson aligned himself with the “popular” or “country” party, which opposed any expansion of the power of the proprietary governors at the expense of the popularly elected lower house. He was a leading opponent of the 1765 Stamp Act, chairing the committee that drafted the instructions for Maryland’s delegates to the Stamp Act Congress. In protest of the Townshend Acts, in 1769 Hanson was one of the signers of a nonimportation resolution that boycotted British imports until the acts were repealed.{sfn|Stiverson|2000}

Hanson changed course in 1769, apparently to better pursue his business interests. He resigned from the General Assembly, sold his land in Charles County, and moved to Frederick County in western Maryland. There he held a variety of offices, including deputy surveyor, sheriff, and county treasurer.{sfn|Stiverson|2000}{sfn|Papenfuse|1979}

When relations between Great Britain and the colonies became a crisis in 1774, Hanson became one of Frederick County’s leading Patriots. He chaired a town meeting that passed a resolution opposing the Boston Port Act.{sfn|Stiverson|2000} In 1775, he was a delegate to the Maryland Convention, an extralegal body convened after the colonial assembly had been prorogued. With the other delegates, he signed the Association of Freemen on July 26, 1775, which expressed hope for reconciliation with Great Britain, but also called for military resistance to enforcement of the Coercive Acts.{sfn|Mereness|1932}

Hanson was elected to the newly reformed Maryland House of Delegates in 1777, the first of five annual terms.{sfn|Stiverson|2000} In December 1779, the House of Delegates named Hanson as a delegate to the Second Continental Congress; he began serving in Congress in Philadelphia in June 1780.{sfn|Levering|1976|p=127}{sfn|Papenfuse|1979} “Hanson came to Philadelphia with the reputation of having been the leading financier of the revolution in western Maryland, and soon he was a member of several committees dealing with finance.”{sfn|Levering|1976|p=127}

The Articles of Confederation stipulated that presidents of Congress serve one-year terms, and Hanson became the first president to do so.{sfn|Stiverson|2000}{sfn|Burnett|1941|p=524} {sfn|Sanders|1930|p=24} Contrary to the claims of some of his later advocates, however, he was not the first president to serve under the Articles, nor the first to be elected under the Articles.{sfn|Morris|1987|p=677} When the Articles went into effect in March 1781, Congress did not bother to elect a new president; instead, Samuel Huntington continued serving a term that had already exceeded a year.{sfn|Burnett|1941|p=503} On July 9, 1781, Samuel Johnston became the first man to be elected as president of Congress after the ratification of the Articles.{sfn|Sanders|1930|p=21n73} He declined the office, however, perhaps to make himself available for North Carolina’s gubernatorial election.{sfn|Sanders|1930|p=21} After Johnston turned down the office, Thomas McKean was elected.{sfn|Sanders|1930|p=20}{sfn|Burnett|1941|p=503} McKean served just a few months, resigning in October 1781 after hearing news of the British surrender at Yorktown. Congress asked him to remain in office until November, when a new session of Congress was scheduled to begin.{sfn|Burnett|1941|p=524} It was in that session that Hanson began to serve his one-year term. A highlight of Hanson’s term was when George Washington presented Cornwallis’s sword to Congress.{sfn|Levering|1976|pp=128–29}

In 1781, during Hanson’s presidency, Ned Barnes, one of Hanson’s slaves, ran away. Hanson published an advertisement in the Maryland Gazette, offering a $30 reward for Barnes’ recapture. Barnes was recaptured, but he stole a horse and ran off again to be with his wife, who lived on a plantation in Charles County, Maryland.{sfn|Levering|1976|p=131} Hanson gave up on getting Barnes back and instead sold him to the plantation to which he had escaped.{sfn|Lee|1994|p=217}

Hanson retired from public office after his one-year term as president of Congress. In poor health, he died on November 15, 1783,{sfn|Stiverson|2000} while visiting Oxon Hill Manor in Prince George’s County, Maryland, the plantation of his nephew Thomas Hawkins Hanson. He was buried there.{sfn|Papenfuse|1979} Hanson owned at least 223 acres of land and 11 slaves at the time of his death.{sfn|Papenfuse|1979}

In 1898, Douglas H. Thomas, a descendant of Hanson, wrote a biography promoting Hanson as the first true President of the United States. Thomas became the “driving force”{sfn|Emory|1975} behind the selection of Hanson as one of the two people who would represent Maryland in the National Statuary Hall Collection in Washington, D.C.{sfn|Emory|1975}{sfn|Stiverson|2000} Hanson was not initially on the shortlist for consideration, but he was chosen after lobbying by the Maryland Historical Society.{sfn|Du Lac|2011} In 1903, bronze statues of Hanson and Charles Carroll by sculptor Richard E. Brooks were added to Statuary Hall; Hanson’s is currently located on the 2nd floor of the Senate connecting corridor.{sfn|Statuary Hall|2013} Small versions of these two statues (maquettes) sit on the president’s desk in the Senate Chamber of the Maryland State House.{sfn|State House|2007}

Some historians have questioned the appropriateness of Hanson’s selection for the honor of representing Maryland in Statuary Hall. According to historian Gregory Stiverson, Hanson was not one of Maryland’s foremost leaders of the Revolutionary era.{sfn|Stiverson|2000} In 1975, historian Ralph Levering said that “Hanson shouldn’t have been one of the two Marylanders” chosen,{sfn|Emory|1975} but he wrote that Hanson “probably contributed as much as any other Marylander to the success of the American Revolution”.{sfn|Levering|1976|p=117} In the 21st century, Maryland lawmakers have considered replacing Hanson’s statue in Statuary Hall with one of Harriet Tubman.{sfn|Du Lac|2011}{sfn|Bykowicz|2011}

In 1972, Hanson was depicted on a 6-cent US postal card, which featured his name and portrait next to the word “Patriot”.{sfn|Lidman|1972} Historian Irving Brant criticized the selection of Hanson for the card, arguing that it was a result of the “old hoax” promoting Hanson as the first president of the United States.{sfn|Brant|1972} In 1981, Hanson was featured on a 20-cent US postage stamp.{sfn|Arago|2013} U.S. Route 50 between Washington D.C. and Annapolis is named the John Hanson Highway in his honor. There are also middle schools located in Oxon Hill, Maryland, and Waldorf, Maryland, named after him. A former savings bank named for him was merged in the 1990s with Industrial Bank of Washington, D.C.

In the 1970s, a descendant of Hanson, John Hanson Briscoe, served as Speaker of the Maryland House of Delegates, which passed “a measure establishing April 14 as John Hanson Day”.{sfn|Bykowicz |2011} In 2009 the John Hanson Memorial Association was incorporated in Frederick, Maryland to create the John Hanson National Memorial and to both educate Americans about Hanson as well as counter the many myths written about him. The Memorial includes a statue of President John Hanson and an interpretive setting in Frederick, Maryland, where Hanson lived between 1769 and his death in 1783. The Memorial is in the Frederick County Courthouse’s courtyard at the corner of Court and West Patrick Streets. Leaders of the Memorial include President Peter Hanson Michael, Vice President Robert Hanson and Directors John Hanson Briscoe and John C. Hanson.