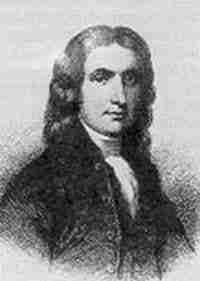 John Hart (c. 1711 – May 11, 1779) was a Delegate from New Jersey to the Continental Congress and a signer of the United States Declaration of Independence.

Sources disagree as to John Hart’s year and place of birth. Some place his birth as early as 1706 in Stonington, Connecticut; others insist that he was born in 1713, and after his parents had moved to Hopewell Township, New Jersey in what was then Hunterdon County (now part of Mercer County). He was the son of Captain Edward Hart, a farmer, public assessor, Justice of the Peace, and leader of a local militia unit during the French and Indian War, and grandson of John Hart, a carpenter who came to Hopewell from Newtown, Long Island. An earlier ancestor was Edward Hart, the clerk for the town of Flushing on Long Island{Citation needed|date=October 2007} who authored the Flushing Remonstrance on December 27, 1657, considered the first expression of religious freedom in America.

By 1739 John Hart had acquired his own farm near Smithville, and in 1741 he married Deborah Scudder. The couple would have thirteen children: Sarah, Jesse, Martha, Nathaniel, John, Susanna, Mary, Abagail, Edward, Scudder, an infant daughter, Daniel, and Deborah, of whom only Daniel and Deborah were still minor children at John Hart’s death in 1779. Deborah Hart predeceased her husband, dying October 8, 1776.

Hart was a member of the Pennington{Citation needed|date=July 2008} Presbyterian Church, but in 1747 he donated a piece of land in his front meadow to local Baptists who had been seeking a place to build a church of their own. The location was known for some time thereafter as the Old Baptist Meeting House.

Hart was elected to the Hunterdon County Board of Chosen Freeholders in 1750. He was first elected to the New Jersey colonial Assembly in 1761 and served there until 1771. He was appointed to the local Committee of Safety and the Committee of Correspondence, and became a judge on the Court of Common Pleas. He was often called “Honest John.”

When New Jersey formed a revolutionary assembly (or provincial congress) in 1776 he was elected to it and served as its Vice President. Prior to June 1776, the New Jersey delegation in the First Continental Congress was opposed to independence. As a result, the entire delegation was replaced, and Hart was one of those selected for the Second Continental Congress. He joined in time to vote for and sign the Declaration of Independence.

He served only until August of that year, then was elected Speaker of the newly formed New Jersey General Assembly. He would later take on additional duties as Treasurer of the Council of Safety (which was given “extraordinary and summary powers” to carry out affairs of the state during emergencies), President of the Joint Meetings of the New Jersey Congress, and Commissioner of the State Loan Office.

Hart Boulevard in Flemington, New Jersey is named after him.

==Actions during the war==

In December 1776, the British advance into New Jersey reached Hunterdon County. A marked man due to his status as Speaker of the Assembly, the elderly Hart was obliged to escape and hide for a short time in the nearby Sourland Mountains. His farm was raided by British and Hessian troops, who damaged but did not destroy the property. The Continentals’ capture of Trenton on December 26 allowed Hart to return home.

Prior to the Battle of Monmouth, Hart invited Gen. George Washington and the Continental Army to make camp on his farm, and his offer was accepted. From June 22–24, 1778, 12,000 men occupied his fields, and on at least one occasion Gen. Washington dined with their host.

On November 7, 1778, John Hart returned to Hopewell from the Assembly in Trenton. Two days later, he indicated that he was too ill with “gravel” (kidney stones) to return. He continued to suffer from the painful affliction for more than six months until his death on May 11, 1779.