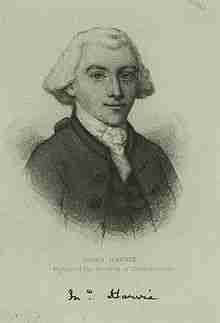 John Harvie (1742 – February 6, 1807) was an American lawyer and builder from Virginia. He was a delegate to the Second Continental Congress in 1777 and 1778, where he signed the Articles of Confederation.

John Harvie was born in Albemarle County, Virginia, in 1742, to farmer and Scottish immigrant Col. John Harvie, Sr. (1706–1767) and Martha Gaines Harvie (1719–1802). His brother Richard was an older brother who resided in what is off US 60 in Amherst County now, of five children. As a boy, Harvie was a close friend of Thomas Jefferson, and his father became Jefferson’s legal guardian after his cousin Peter Jefferson died in 1757. John read law and was admitted to the bar before settling in Augusta County.

In 1774 he was named as a commissioner to the Shawnee tribe to negotiate a peace treaty after the Battle of Point Pleasant. Augusta County sent him to the Virginia conventions (the revolutionary legislature) in 1775 and 1776. The following year that body sent him as a delegate to the Second Continental Congress. While at the Continental Congress, Harvie was one of five Virginia delegates to sign the of, on July 9, 1778.

During the rest of the Revolution, Harvie received the provisional rank of colonel, serving as a purchasing agent and supply organizer for Virginia’s militia and Continental Army units. In 1780, he moved to Richmond, Virginia and began work as a land developer and builder. From 1785 to 1786, Harvie served as the fourth mayor of Richmond.

He was chosen as an elector for the 1789 election from Henrico District. That District consisted of Charles City County, Goochland County, Henrico County, James City County, Louisa County, and New Kent County, which cover the area east and west of Richmond. All of the ten electors from Virginia who voted cast one of their two votes for George Washington. Five of them cast their other vote for John Adams; three cast theirs for George Clinton; one cast his for John Hancock; and one cast his for Jay.

Harvie built a number of buildings in Richmond and public works in the area. While he was inspecting one of these sites (the Gamble House) on February 6, 1807 he died from an accidental fall from a ladder on the roof. He was buried at the family plot, at his home. This property later became part of the Hollywood Cemetery in Richmond.