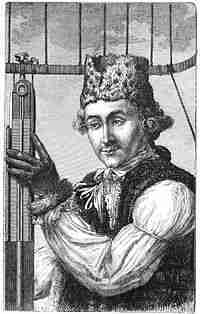 John Jeffries (5 February 1744 – 16 September 1819) was a Boston physician, scientist, and a military surgeon with the British Army in Nova Scotia and New York during the American Revolution. Born in Boston, Jeffries graduated from Harvard College and obtained his medical degree at the University of Aberdeen. He is best known for accompanying Jean-Pierre Blanchard on his 1785 balloon flight across the English Channel. Dr. Jeffries also played a large role in the trial for the Boston Massacre as a witness for the defense. He was the surgeon for Patrick Carr, who was one of the Americans shot during that incident.

Jeffries is also credited with being among America’s first weather observers. He began taking daily weather measurements in 1774 in Boston, as well as taking weather observations in a balloon over London in 1784. National Weatherperson’s Day is celebrated in his honor on 5 February, his birthday. The Archives and Special Collections at Amherst College holds a collection of his papers, including a letter he dropped from the balloon during his historic flight, considered the oldest piece of airmail in existence.

He lived in England from 1776 to 1790 and returned to private practice until his death in Boston in 1819. His son John Jeffries II (1796-1876) was an ophthalmic surgeon and co-founded the Massachusetts Charitable Eye and Ear Infirmary.