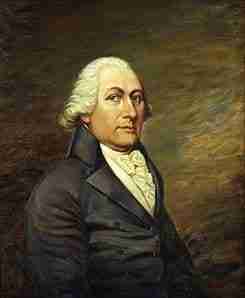 John Langdon (June 26, 1741{spaced ndash}September 18, 1819) was a politician from Portsmouth, New Hampshire, and one of the first two United States senators from that state. Langdon was an early supporter of the Revolutionary War and served in the Continental Congress. After being in Congress for 12 years, including serving as the first president pro tempore of the Senate, Langdon became governor of New Hampshire. He turned down a nomination for vice presidential candidate in 1812, and later retired until his death in 1819.

His father was a prosperous farmer and local ship builder, whose family had emigrated to America before 1660 from Sheviock, Caradon, Cornwall, and was among the first to settle near the mouth of Piscataqua River, a settlement which became Portsmouth, one of New England’s major seaports. Langdon attended the local grammar school, run by a veteran of the 1745 Siege of Louisbourg against the French at Fortress Louisbourg in New France. After finishing his primary education, Langdon served an apprenticeship as a clerk. He and his older brother, Woodbury Langdon, rejected the opportunity to join in their father’s successful agricultural pursuits, and went to sea instead, apprenticed themselves to local naval merchants.

By age 22, Langdon was captain of a cargo ship called the Andromache, sailing to the West Indies. Four years later he owned his first merchantman, and would continue over time to acquire a small fleet of vessels, engaged in the triangular trade between Portsmouth, the Caribbean, and London. His older brother was even more successful in international trade, and by 1777 both young men were among Portsmouth’s wealthiest citizens.

British control of the shipping industries greatly hurt Langdon’s business, motivating him to become a vigorous and prominent supporter of the revolutionary movement in the 1770s. He served on the New Hampshire Committee of Correspondence and a nonimportation committee, and also attended various Patriot assemblies. In 1774, he participated in the seizure and confiscation of British munitions from Fort William and Mary.

Langdon served as a member of the Second Continental Congress from 1775 to 1776. He resigned in June 1776 to become agent for the Continental forces against the British and superintended the construction of several warships including the Raleigh, the America, and the Ranger, which was captained by John Paul Jones. In 1777, he equipped an expedition against the British, participating in the Battle of Bennington and commanding Langdon’s Company of Light Horse Volunteers at Saratoga and in Rhode Island.

In 1784, he built at Portsmouth the mansion now known as the Governor John Langdon House. Langdon was elected to two terms as President of New Hampshire, 1785–86 and 1788–89. He was a member of the Congress of the Confederation in 1787 and became a delegate to the Constitutional Convention in 1787, serving as a member of the New Hampshire delegation. Langdon was elected to the U.S. Senate and served from March 4, 1789, to March 4, 1801. He was elected the first President pro tempore of the Senate on April 6, 1789, and also served as President pro tempore during the Second Congress.

During the 1787 Constitutional debates in Philadelphia, Langdon spoke out against James Madison’s proposed “negative” on State laws simply because he felt that should the Senate be granted this power and not the House of Representatives, it would “hurt the feelings” of House members.{Dubious|date=November 2013}

In 1798, Langdon assisted Oney Judge to evade Burwell Bassett, the nephew of George & Martha Washington, who had intended to kidnap Judge and return her to slavery with the Washingtons.

Langdon later served as a member of the New Hampshire Legislature (1801–05), with the last two terms as speaker; he served as governor from 1805–12, with the exception of 1809–10. In 1808, his niece, Catherine Whipple Langdon, married Edmund Roberts. Langdon declined the nomination to be a candidate for vice president with James Madison in 1812, and later retired. He died in his hometown of Portsmouth in 1819, and was interred at the Langdon Tomb in the North Cemetery.

The town of Langdon, New Hampshire is named after him, as well as Langdon Street in Madison, Wisconsin, a town with several streets named after founding fathers.