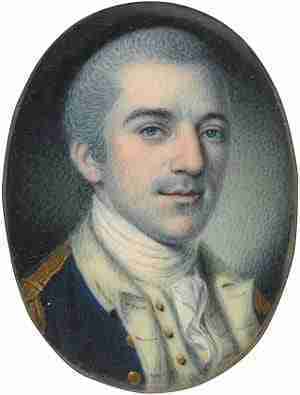 John Laurens (October 28, 1754{spaced ndash}August 27, 1782) was an American soldier and statesman from South Carolina during the American Revolutionary War, best known for his efforts to help recruit slaves to fight for their freedom as soldiers, in addition to his critical views against slavery, which set Laurens apart from many of his compatriots of the time.

Although Laurens gained approval from the Continental Congress in 1779 to recruit a brigade of 3,000 slaves by promising them freedom in return for fighting, he was killed in the Battle of the Combahee River in August 1782.

Laurens was born in 1754 to Henry Laurens and Eleanor Ball in Charleston, South Carolina; both their families were planters who had grown wealthy through cultivation of rice based on slave labor. Henry Laurens ran one of the largest slave trading houses in the country with his partner Richard Oswald.

John was the eldest of the five children who survived infancy. John and his two brothers were tutored at home, but after the death of their mother, their father took them to England for their education. John completed his studies in Europe, first in London in 1771, then in Geneva, Switzerland in 1772. As a youth, John expressed considerable interest in science and medicine, but he yielded to his father’s wish that he study law. In August 1774 he returned to London to do so.

His father returned to South Carolina but refused to let John return until completing his legal studies two years later. In the summer of 1777, after the Revolutionary War had started, Laurens accompanied his father to Philadelphia, where the senior man was to serve in the Continental Congress. Despite the father’s objections, the younger Laurens continued on to General George Washington’s camp as a volunteer at the age of 23.

Laurens joined the Continental Army and following the Battle of Brandywine, was made officially an aide-de-camp to General Washington with the rank of Lieutenant Colonel. He served with the Baron von Steuben, doing reconnaissance at the outset of the Battle of Monmouth.

He became close friends with his fellow aide-de-camp, Alexander Hamilton and the General Marquis de Lafayette. He showed reckless courage at the battles of Brandywine, Germantown in which he was wounded, and Monmouth, where his horse was shot out from under him. After the battle of Brandywine, Lafayette observed that, “It was not his fault that he was not killed or wounded … he did every thing that was necessary to procure one or the other.” {Citation needed|date=March 2011}

As the British stepped up operations in the South, Laurens promoted the idea of arming slaves and granting them freedom in return for their service. He had said, “We Americans at least in the Southern Colonies, cannot contend with a good Grace, for Liberty, until we shall have enfranchised our Slaves.” In early 1778 he proposed to his father to use the 40 slaves he stood to inherit as part of a brigade. Henry, now President of the Continental Congress, granted his wish, but his reservations made John postpone the project.

In March 1779, Congress approved the concept, commissioned Laurens as Lieutenant Colonel, and sent him south to recruit a regiment of 3000 blacks. He won election to the South Carolina House of Representatives, and introduced his black regiment plan in 1779 and 1780 (and again in 1782), meeting overwhelming rejection each time. Governor Rutledge and Christopher Gadsden {Who|date=January 2012} opposed him. Laurens’ belief that blacks shared a similar nature with whites and could aspire to freedom in a republican society set Laurens apart from other leaders in revolutionary South Carolina.

In 1779, when the British threatened Charleston, Governor Rutledge proposed to surrender the city with the condition that Carolina become neutral in the war. Laurens strongly opposed the idea, and Continental forces repulsed the British. That fall he commanded an infantry regiment in General Benjamin Lincoln’s failed assault on Savannah, Georgia. Laurens became a prisoner in May 1780 after the fall of Charleston and was shipped to Philadelphia. As he was on “parole”, he was able to see his father before the elder embarked for the Netherlands in search of loans. (Henry Laurens’ ship was seized by the British and he was imprisoned at the Tower of London.) Exchanged in November, Laurens was appointed by Congress in December as a special minister to France.

In March 1781, Laurens gained French assurances that their navy would support American operations that year. He also arranged a loan and supplies from the Dutch before returning home in May. Laurens was reported to have told the French that without aid for the Revolution, the Americans might be forced by the British to fight against France. He returned home in time to see the French fleet arrive and to join Washington at the siege of Yorktown. He was given command of a battalion of light infantry on October 1, 1781, when its commander was killed. He led the battalion under Lt-Col. Alexander Hamilton in the storming of redoubt redoubt No. 10. Laurens was the principal spokesman for negotiating General Cornwallis’s surrender. {Citation needed|date=January 2012}

Laurens returned to South Carolina and served General Nathanael Greene by creating and operating a network of spies that tracked British operations in and around Charleston. In August 1782, he learned of a British force movement to gather supplies and left his post to join Mordecai Gist in an attempt to intercept them. He was killed in the Battle of the Combahee River when he was shot from the saddle. Gravely wounded, Laurens was succeeded in his command by his friend and fellow opponent of slavery, Tadeusz Kosciuszko, a Polish nobleman.

Laurens was killed in battle on August 27, 1782, at the age of 27, only a few weeks before the British finally withdrew from Charleston. He was buried on the Stock plantation. After his father Henry Laurens returned from his own imprisonment in London, he had his son’s remains moved to his plantation, called Mepkin, near Moncks Corner. During the mid 20th century Mepkin Plantation was owned by Henry Luce and Clare Boothe Luce. It was later adapted as a Trappist monastery, Mepkin Abbey.

George Washington, in particular, was saddened upon learning of the death of Laurens, stating fondly:

In his general orders, Nathanael Greene, in announcing the death of Laurens, said:

In October 1782, Alexander Hamilton, a friend of Laurens, wrote of his death to Nathanael Greene:

In late 1776, in London, Laurens married Martha Manning, the daughter of one of his father’s London agents. In December he sailed for Charleston, leaving Martha behind and pregnant. Their daughter was born in February 1777.

According to Daniel Wheeler’s Life and Writings of Thomas Paine, Volume 1 (of 10, Vincent & Parke, 1908) pp. 26–27: Thomas Paine accompanied Colonel John Laurens to France and is credited with initiating the mission. It landed in France in March 1781 and returned to America in August with 2.5 livres in silver, as part of a “present” of 6 million and a loan of 10 million. The meetings with the French king were most likely conducted in the company and under the influence of Benjamin Franklin. Upon return to the United States with this highly welcomed cargo, Thomas Paine “positively objected” that Washington should propose that Congress remunerate him for his services for fear of setting “a bad precedent and an improper mode”. According to an account by Elbert Hubbard in the same volume (p. 314), Paine organized “the Bank of North America to raise money to feed and clothe the army, and performed sundry and various services for the colonies.” {Citation needed|date=January 2012}

Henry Laurens (John Laurens’ father) had been ambassador to the Netherlands but was captured by the British on his return trip there. When exchanged for General Cornwallis in late 1781, the senior Laurens proceeded to the Netherlands to continue loan negotiations. Historians have questioned the relationship of Henry Laurens and Thomas Paine to Robert Morris as Superintendent of Finance and his business associate Thomas Willing. The latter became the first president of the Bank of North America in January 1782. Laurens and Paine accused Morris of war profiteering in 1779, and Willing had voted against the Declaration of Independence. The credit for obtaining the critical loans in 1781 and 1782, and first “organizing” the Bank of North America for approval by Congress in December 1781 should certainly include Henry or John Laurens and Thomas Paine.{Citation needed|date=March 2011}

There are modern reports circulated that John Laurens had a homosexual relationship with Alexander Hamilton. These reports are based upon letters Hamilton wrote Laurens during a period in which Laurens was absent from the camp. In preparing a biography, Hamilton’s family crossed out parts of letters they each sent one another. Their reason for doing so is unknown, however it has been speculated that it was because the letters contained language that would be too suggestive of or confirm a homosexual relationship between the two if the letters were made public. It is impossible to know, however, why the parts of the letters were crossed out, and what the crossed out sections contained. It is also important to understand that the language in the letters was not uncommon among those of the same sex in this historical period. However, Hamilton was never as emotionally open with any other man in his lifetime, and the depths of sentiment are equaled only in letters he wrote to his wife Eliza. Hamilton knew no other peer in similar rank, age, and war experience with which to share a relationship, romantic or otherwise. Whether Laurens reciprocated these feelings is unknown, but it is less likely, as his letters to Hamilton were less frequent and not quite as passionate. Whether their relationship was sexual, romantic, or simply a deep platonic friendship is unknown — sodomy was a punishable offence in all thirteen colonies at the time, so if their relationship was more than friendship, it is likely they would have taken the utmost care to keep it a secret. It is likely that the truth will never be known.

Laurens County, Georgia is named after Laurens, in his honor. In late 2003, Gregory D. Massey, from the University of South Carolina, wrote about Laurens for Archiving Early America:

* Laurens’s proposal for using slaves as troops in the Carolinas was portrayed in the 2000 film The Patriot. Some of Laurens’ words and actions were reflected in the character of Benjamin Martin in the film.