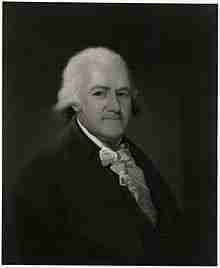 John Lowell (June 17, 1743, Newburyport, Massachusetts – May 6, 1802, Roxbury, Massachusetts) was an American lawyer, selectman, jurist, delegate to the Congress of the Confederation and federal judge. Known within his family as “The Old Judge,” distinguishing him from the proliferation of Johns, John Lowell is considered to be the patriarch of the Boston Lowells. He, with each of his three wives, established three distinct lines of the Lowell clan that, in turn, propagated celebrated poets, authors, jurists, educators, merchants, bankers, national heroes, activists, innovators and philanthropists. John Lowell, his descendants, and many other well established New England families defined American life in the nineteenth and twentieth centuries.

John Lowell’s ancestor, Percival, a merchant, came from Bristol, England, to Newbury, Massachusetts, in 1639, and his father, John, was the first minister of Newburyport, where he officiated 1726-67. The minister married Sarah Champney, and “The Old Judge” was their second son, born in Newburyport. He was the only child to survive infancy. John was among the third generation in the Lowell family to be born in the New World and the second generation to attend Harvard College. Like his father before him, Lowell graduated at the age of 17, in 1760. John was admitted to the bar in 1763 and soon established his law practice in Newburyport, Massachusetts.

Lowell married his second wife, Susanna(1754–77), daughter of Francis Cabot and Mary Fitch, on May 31, 1774. Together they had two children, Francis Cabot (1775–1817) and Susanna Cabot (1776–1816). Francis Cabot became a leader and innovator in American industry; the city of Lowell, Massachusetts, is named in his honor. Descendants of Francis Cabot include businessman and philanthropist John Lowell, Jr., federal judge Francis Cabot Lowell, and architect Guy Lowell. Susanna died on March 30, 1777.

At the onset of the American Revolution, and after Susanna’s death, seizing upon the opportunity as the wealthy Tories of Boston fled local hostility for the safety of England, abandoning their grand estates, John Lowell relocated his children to Roxbury, Massachusetts, and his law practice to Boston. On December 25, 1778, John married his third wife, Rebecca (1747–1816), widow of James Tyng and daughter of Judge James Russell and Katharine Graves.

It is through John Lowell’s daughter-in-law, the wife of Francis Cabot, Hannah Jackson (1776–1815), who was a granddaughter of Edward and Dorthy (Quincy) Jackson, that descendants of both the Francis Cabot and John Amory families claim relation to the Holmeses of Boston, which include poet Oliver Wendell Holmes, Sr. and U.S. Supreme Court Justice and Civil War hero Oliver Wendell Holmes, Jr..

Other notable children of the daughters and granddaughters of John Lowell include mathematician Julian Lowell Coolidge, and writer and biographer Ferris Lowell Greenslet.

After establishing his law practice in Newburyport in 1763, Lowell served as a town Selectman in 1771–1772, 1774 and 1776. In the spring of 1774 he signed addresses complimenting royal governors Thomas Hutchinson and Thomas Gage, but made a public apology for doing so at the end of the year. Thereafter, Lowell was an enthusiastic patriot and served for a time as a lieutenant of the Massachusetts militia. In 1776, he was elected Representative to the General Court from Newburyport and, in 1778, Lowell elected to the same post from Boston.

Lowell was chosen to be a member of the convention that was tasked with framing the Massachusetts Constitution in 1779. He is best remembered for authoring Article I and his insistence upon its adoption into the Bill of Rights, “All men are born free and equal, and have certain natural, essential and inalienable rights, among which may be reckoned the right of enjoying and defending their lives and liberties…”

Lowell’s son, the Rev. Charles Lowell, D.D., wrote in a personal letter eight decades later, “My father introduced into the Bill of Rights the clause by which Slavery was abolished in Massachusetts… and when it was adopted, exclaimed: ‘Now there is no longer Slavery in Massachusetts, it is abolished and I will render my services as a lawyer gratis to any slave suing for his freedom if it is withheld from him…’ and he did so defend the negro slave against his master under this clause of the constitution which was declared valid by the Massachusetts Supreme Court in 1783, and since that time Slavery in Mass. has had no legal standing.”

In 1782–83, Lowell was elected to represent the Commonwealth of Massachusetts as a Delegate to the Third Congress of the Confederation in Philadelphia, Pennsylvania. The Continental Congress met in the library of Nassau Hall at Princeton University and “congratulated George Washington on his successful termination of the war, received the news of the signing of the definitive treaty of peace with Great Britain, and welcomed the first foreign minister—from the Netherlands—accredited to the United States.”

Lowell returned to Boston with an appointment to the U.S. Admiralty Court of Appeals. In 1784, he was appointed commissioner to settle the boundary dispute between Massachusetts and the State of New York. John was appointed to the Massachusetts Court of Appeals for a brief time in 1789 before being appointed by President George Washington, on September 24, 1789, to a newly established seat on the United States District Court for the District of Massachusetts, created by 1 Stat. 73. Confirmed by the United States Senate on September 26, 1789, and receiving his commission the same day, Lowell served the newly created federal government in this position until 1801. On February 18, 1801, President John Adams nominated Lowell to serve as the first Chief Judge, another newly created seat, on the U.S. Circuit Court for the First Circuit (Maine, New Hampshire, Massachusetts, and Rhode Island). Lowell was again confirmed by the Senate, and awarded his commission, on February 20, 1801, continuing to serve in that office until his death the following year.

Lowell was also a member of the Harvard Corporation for 18 years. He was founding trustee of Phillips Academy, serving from 1778 to 1802; and a charter member of the American Academy of Arts and Sciences. Lowell died at his home in Roxbury on May 6, 1802, at age 59.