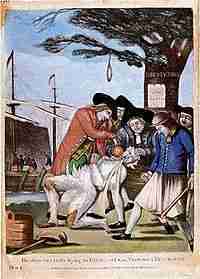 John Malcolm (died 1788) was a sea captain, army officer, and British customs official who was the victim of the most publicized tarring and feathering incident during the American Revolution.

A Bostonian, Captain Malcolm was a staunch supporter of royal authority. During the War of the Regulation, he traveled to the province of North Carolina to help put down the uprising. While working for the customs service, he pursued his duties with a zeal that made him unpopular. The fact that he was a loyalist during the Tea Act, the three-pence tea tax detested by the patriots did not help his reputation. In November 1773, sailors in Portsmouth, New Hampshire, tarred and feathered him. Malcolm got off relatively easy in this attack, since the tar and feathers were applied while he was still fully clothed.

As a hard-line Loyalist, Malcolm often faced abuse and provocation from Boston’s Patriots, the critics of British authority. People often “hooted” at him in the streets, but Governor Thomas Hutchinson urged him not to respond.

A confrontation with Patriot shoemaker George Hewes thrust Malcolm into the spotlight. On January 25, 1774, according to the account in the Massachusetts Gazette, Hewes saw Malcolm threatening to strike a boy with his cane. When Hewes intervened to stop Malcolm, the two men began arguing, with Malcolm insisting that Hewes should not interfere in the business of a gentleman. When Hewes replied that at least he (Hewes) had never been tarred and feathered, Malcolm struck Hewes hard on the forehead with the cane, knocking him unconscious.

That night, a crowd seized Malcolm in his house and dragged him into King Street in order to punish him for the attack on Hewes and the boy. Some Patriot leaders, believing that mob violence hurt their cause, tried to dissuade the crowd, arguing that Malcolm should be turned over to the justice system. Hewes, who had recovered, also protested against the attack on Malcolm. The crowd refused to relent, however, citing (among other arguments) the fact that Ebenezer Richardson, a customs official who had killed Boston teenager Christopher Seider, had escaped punishment by receiving a royal pardon. Malcolm was stripped to the waist and covered with tar and feathers. The crowd then took him to the Liberty Tree and told him to apologize for his behavior and renounce his customs commission. When Malcolm refused, the crowd put a rope around his neck and threatened to hang him. This did not break him, but when they threatened to cut off his ears, Malcolm relented and was sent home. The event was reported in newspapers on both sides of the Atlantic.

After these events, Malcolm moved to England, where he unsuccessfully ran for Parliament against John Wilkes, the controversial champion of colonial rights.