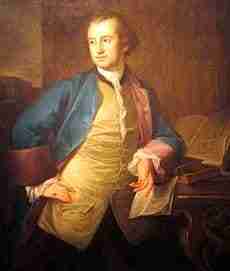 John Morgan (June 10, 1735 – October 15, 1789) was co-founder of the Medical College at the University of Pennsylvania, the first medical school in Colonial America; and he served as the second “Chief physician & director general” of the Continental Army (an early name for the U.S. Army Surgeon General). He also founded the American Philosophical Society in 1766 in Philadelphia.

The first son of Evan Morgan, an immigrant from Wales, and Joanna Biles, Morgan was born in Philadelphia in the Province of Pennsylvania. After a classical education at Nottingham Academy in Chester County, he graduated from the College of Philadelphia (now the University of Pennsylvania) in 1757.

He fought for the British during the Seven Years War, commissioned as a lieutenant and serving as a surgeon on the western frontier. After that he studied medicine at the University of Edinburgh, Scotland, where he earned his degree in 1763. He did some touring in Europe, studying medical practice in Paris and visiting Italy. During this time, he was elected to the Royal Academy of Surgery at Paris in 1764 and the Royal College of Physicians of Edinburgh and of London in 1765.

That year with Dr. William Shippen, another Edinburgh graduate, Morgan co-founded the College of Philadelphia (now the University of Pennsylvania) Medical School, the first medical school in North America.

Morgan served as Chief Physician to the Continental Army from October 1775 to January 1777. He was empowered by the U.S. Congress to inspect regimental hospitals and transfer patients if warranted and to examine regimental surgeons. Rancor with the regimental surgeons became so bad that Morgan quit when the Army moved from Boston to New York.

He was a founding member of the American Philosophical Society in 1766, based in Philadelphia.