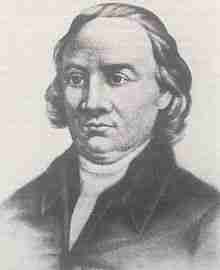 John Morton (1725 – April 1, 1777) was a farmer, surveyor, and jurist from the Province of Pennsylvania. As a delegate to the Continental Congress during the American Revolution, he provided the swing vote that allowed Pennsylvania to vote in favor of the United States Declaration of Independence. Morton signed the Declaration and chaired the committee that wrote the Articles of Confederation.

Morton was born in Ridley Township, in Chester County, Pennsylvania, now part of Delaware County. His father, John Morton (Senior), was Finnish, who originated from Finland with his great-grandfather, Martti Marttinen (the family’s original name, anglicized as Morton), himself a native of Rautalampi, Finland, who had arrived in the Swedish colony of New Sweden in 1654. His mother, Mary Archer, was also of Finnish descent.

His father died before he was born, and when John was about seven years old, his mother married John Sketchley, a farmer of English ancestry, who educated Morton. About 1748, Morton married Ann Justis, the great-granddaughter of Finnish colonists to New Sweden. The couple would have nine children. Morton was an active member of the Anglican Church in Chester County.

Morton was elected to the Pennsylvania Provincial Assembly in 1756. The following year he was also appointed justice of the peace, an office he held until 1764. He served as a delegate to the Stamp Act Congress in 1765. He resigned from the Assembly in 1766 to serve as sheriff of Chester County. He returned to the Assembly in 1769 and was elected Speaker in 1775. Meanwhile, his judicial career reached its pinnacle with his appointment as an associate justice of the Supreme Court of Pennsylvania in 1774.

Morton was elected to the First Continental Congress in 1774 and the Second Continental Congress in 1775. He cautiously helped move Pennsylvania towards independence, though he opposed the radical Pennsylvania Constitution of 1776. When in June 1776 Congress began the debate on a resolution of independence, the Pennsylvania delegation was split, with Benjamin Franklin and James Wilson in favor of declaring independence, and John Dickinson and Robert Morris opposed. Morton was uncommitted until July 1, when he sided with Franklin and Wilson. When the final vote was taken on July 2, Dickinson and Morris abstained, allowing the Pennsylvania delegation to support the resolution of independence without dissent. Morton signed the Declaration on August 2 with most of the other delegates.

Morton was chairman of the committee that wrote the Articles of Confederation, although he died, probably from tuberculosis, before the Articles were ratified. He was the first signer of the Declaration of Independence to die and was buried in St. Paul’s Burying Ground (also known as the Old Swedish Burial Ground) in the city of Chester, Pennsylvania.