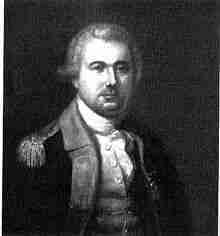 Major John Patten (April 26, 1746 – December 26, 1800) was a United States farmer and politician from Dover, in Kent County, Delaware. He was an officer of the Continental Army in the American Revolution, a Continental Congressman, and a member of the Democratic-Republican Party, who served in the Delaware General Assembly and as a United States Representative from Delaware.

Patten was born at Tynhead Court, near Dover, Delaware, son of John Patten and Ann Maxwell. This property was on the present Dover Air Force Base, near the farms of Caesar Rodney and John Dickinson. He was a farmer, who after the American Revolution married Ann Haslet, daughter of the first Colonel of the 1st Delaware Regiment, John Haslet. She died soon thereafter, and he married Mary Miller Loockerman, daughter of the Rev. John Miller and widow of Vincent Loockerman.

Patten was commissioned a first lieutenant in Captain John Caldwell’s 2nd Company of the 1st Delaware Regiment at the beginning of the American Revolutionary War. He was soon promoted to captain of the 1st Company and in February 1779 and was promoted to the rank of major. He fought in every major battle from the Battle of Long Island until the Battle of Camden, where the Delaware Regiment suffered grievous losses, and he was taken prisoner. Paroled in 1781, after the fighting was over, he is said to have walked home alone in rags from Charleston, South Carolina.

Patten was elected in 1785 to the State House or House of Assembly, as it was then known, and represented Kent County, during the 1785/86 session. At the same time he was elected to the Continental Congress in 1785 and served there one year. He won a closely contested election to the U.S. House in 1792 and took his seat in the U.S. House on March 4, 1793. However, Henry Latimer, the Federal candidate contested the election, claiming that many ballots were invalid because they were filled out incorrectly. After a lengthy study the Federalist majority in the U.S. House voted on February 14, 1794 to invalidate enough ballots to award the seat to Latimer. A few months later Patten again defeated Latimer, and this time served the whole term, from March 4, 1795 until March 3, 1797. Brought out of political retirement in 1800, Patten was defeated for the U.S. House seat by the incumbent Federalist James A. Bayard.

Patten died at his home, Tynhead Court, near Dover, and is buried in the Old Presbyterian Cemetery, which is at Dover, on the grounds of the Delaware State Museum. He had a home on the north side of Front Street, between Orange and Tatnall Streets in Wilmington, Delaware, but was always a legal resident of Kent County. He was active in the Philadelphia Society for promoting Agriculture, the Society of the Cincinnati, and the Lyceum of Delaware.