John Paul Jones is a 1959 biographical epic film about John Paul Jones. The film was made by Samuel Bronston Productions and released by Warner Bros. It was directed by John Farrow and produced by Samuel Bronston from a screenplay by John Farrow, Ben Hecht, Jesse Lasky Jr. from the story Nor’wester by Clements Ripley. The music score was by Max Steiner, the cinematography by Michel Kelber.

The film begins with a United States Navy officer, telling sailors the story of John Paul Jones.
By age 17, John Paul, a native of Scotland, is an experienced ship’s navigator. In 1773, nine years later, he is master of a ship in the West Indies, but after an incident that results in the governor of Tobago advising him to leave, John Paul adds the surname Jones and goes to visit a brother who lives in Fredericksburg, Virginia.
The brother has recently died. Jones hires his attorney, Patrick Henry, to assist in business matters. He also takes a romantic interest in Henry’s sweetheart, Dorothea Danders.

After serving as second-in-command of a battleship in the Bahamas, his adopted countrymen sign the Declaration of Independence. Jones gets his first command, sets sail toward Newfoundland and seizes 18 enemy ships, sending their supplies to American general George Washington.

Washington sends the young officer to France, where he is appreciated for heroic feats at sea. Benjamin Franklin then urges Jones to take a frigate and invade the British Isles. A new vessel is built for him at the suggestion of Marie Antoinette, and the only condition of his majesty King Louis XVI is that Jones’ ship fly under an American flag.
Jones’ successes ultimately lead him to Russia in 1790 at the behest of the empress, Catherine the Great. He returns to Paris ill.

In his review of the film for the New York Times, Bosley Crowther observed: “Stack performs the knotty little Scotsman as though he were a slightly dull but talkative member of a conservative gentleman’s club.”
John Paul Jones, bassist for English rock band Led Zeppelin, took this stage name at the suggestion of a friend, Andrew Loog Oldham, who had seen the film’s poster (his birth name was John Baldwin). 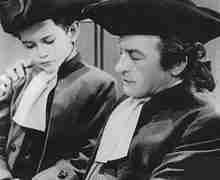 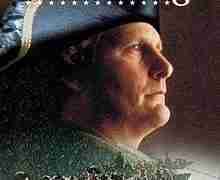