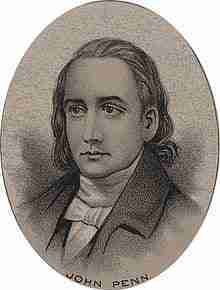 John Penn (May 17, 1741 – September 14, 1788) was a signer of both the United States Declaration of Independence and the Articles of Confederation as a representative of North Carolina.

Penn was born near Port Royal in Caroline County, Virginia, an only child of Moses Penn and Catherine [Taylor] Penn. He attended at common school for only two years as his father did not consider education to be important. At age 18, after his father’s death, Penn privately read law with his uncle, Edmund Pendleton. He became a lawyer in Virginia in 1762. In 1774, Penn moved to the Williamsborough, North Carolina area, where he practiced law.

Penn was elected to the North Carolina Provincial Congress and elected by that body to the Continental Congress in 1775, serving until 1780. For the 1776 signing of the Declaration of Independence, he was part of the North Carolina delegation that included Joseph Hewes and William Hooper. In 1777, Penn was one of the state’s signers of the Articles of Confederation. Penn also served on the Board of War until 1780, when he retired to once again practice law. He served as receiver of taxes for North Carolina in 1784. When Penn died in 1788, he was buried on his estate near Island Creek, in Granville County. Penn was re-interred in Guilford Courthouse National Military Park in 1894, alongside fellow congressional delegate, Hooper.

The naval ship USS John Penn was named in his honor.

An historical highway marker honoring Penn was the first one erected by the State of North Carolina (January 10, 1936)