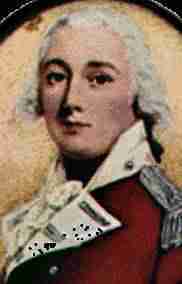 John Pitcairn (28 December 1722{spaced ndash}17 June 1775) was a British Marine officer who was stationed in Boston, Massachusetts at the start of the American Revolutionary War.

Pitcairn was born in late December 1722 in Dysart, a port town in Fife, Scotland. His parents were the Reverend David and Katherine (Hamilton) Pitcairn. He entered the Royal Marines, was commissioned as a Lieutenant in 1746, served in Canada during the French and Indian War as a Captain, and was promoted to Major in 1771. In 1774 he arrived in Boston, Massachusetts, in command of 600 Marines to support the occupation.

Pitcairn was respected by the citizens in Boston as one of the more reasonable officers in the occupying force. He was in command of the advance party when the first shot (the original shot heard ’round the world) was fired at Lexington, Massachusetts on 19 April 1775, starting the Battles of Lexington and Concord. He had a horse shot out from under him, and lost a pair of matched pistols when the column’s baggage was abandoned. American leader Israel Putnam carried them through the rest of the war.

At the Battle of Bunker Hill Pitcairn commanded a reserve force of about 300 Marines. They landed at the south end of the Charlestown peninsula. When the first assaults failed, he led his men up the hill toward the American position, only to fall to a rifle shot, said to have been fired by a black former slave named Peter Salem. He toppled into the arms of his son, William, also a Royal Marine, who cried out, “I have lost my father!” Some of the Marines tried to console the young officer, while others, overcome with emotion, moaned. Pitcairn was carried back to Boston, and died of his wound within hours. He is buried at the Old North Church in Boston.

John Trumbull’s painting of the Battle of Bunker Hill depicts his death, though with several errors and anachronisms. Since no known picture of Pitcairn survives, Pitcairn’s son David Pitcairn was used as a model by Trumbull. The uniform depicted was not actually adopted by the Marines until the 1780s. Pitcairn is shown falling at the bunker at its capture from the American force, while he was shot starting the ascent of the hill. Pitcairn is also depicted in the scene of the Battle of Lexington in the U.S. Capitol rotunda.

Pitcairn was married to Elizabeth Dalrymple (1724–1809), a daughter of Robert Dalrymple. Pitcairn Island in the South Pacific was named for his son, Bacon, a midshipman in the Royal Navy. While on watch on a voyage led by Captain Philip Carteret, 15-year-old Robert Pitcairn was the first to sight the unknown island on 3 July 1767. A daughter, Catherine Pitcairn, married Charles Cochrane, a son of the 8th Earl of Dundonald and a first cousin of Admiral Thomas Cochrane, 10th Earl of Dundonald.

* Pitcairn appears in April Morning, a 1961 novel by Howard Fast depicting the Battle of Lexington and Concord. Pitcairn is also a character in the novel Johnny Tremain.

* Pitcairn is a supporting antagonist in the video game Assassin’s Creed III. Pitcairn supports the Templar goals of total world domination, and in this case, controlling the New World in the name of the Templars. In the game, he is killed on his horse by the protagonist, Native American half British Assassin Ratonhnhaké:ton, in a shot from high in the trees at the Battle of Bunker Hill.