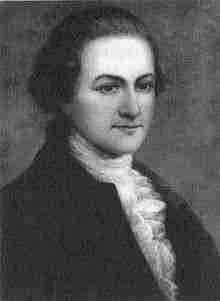 John Middleton “Jack” Vining (December 23, 1758{spaced ndash}February, 1802) was an American lawyer and politician from Dover, in Kent County, Delaware. He was a Continental Congressman from Delaware, and a member of the Federalist Party, who served in the Delaware General Assembly and as United States Representative and United States Senator from Delaware.

Vining was born in Dover, Delaware, son of John and Phoebe Wynkoop Vining. His father was a prominent and successful lawyer and landholder, who had been a Speaker of the Colonial Assembly and Chief Justice of Delaware. He was also the good friend of Caesar Rodney, who stood as godfather for his son John, the subject of this article. Vining’s father died when his son was eleven years old, and from him John and his sister inherited a large fortune. On November 29, 1790, while he was a U.S. Representative in New York City, he married Anna Maria Seton, a poet, musician, and daughter of William Seton of New York. She fit well into Vining’s social swirl. They had four sons, John, William, Benjamin, and Charles, but she died prematurely in 1800.

Vining studied law under George Read in New Castle, Delaware, and was admitted to the Delaware Bar in 1782, starting a practice in Dover. Because of his family’s wealth and prominence he was elected three times to represent Delaware in the Continental Congress. First elected April 8, 1784, he served until October 27, 1786, although, like many of his contemporaries, his attendance was irregular. He was then elected to the 1787/88 and 1788/89 sessions of the Delaware House of Assembly.

In a special election on January 7, 1789, Vining defeated four other candidates to win election as the only Delawarean delegate to the 1st U.S. House of Representatives. Two years later he was re-elected to a second term. Although he arrived weeks late for every session, he was an energetic and conscientious legislator, consistently voting in support of the administration, particularly favoring a strong executive. He served on thirty-eight committees in the 1st U.S. House, including the committee considering the first proposed amendments to the Constitution, and the joint committee on rules.

Vining’s positions were generally loose-constructionist, or Hamiltonian. Accordingly, he strongly favored the federal assumption of the state’s revolutionary war debts. In the debate over the location of a national capital, he sought consideration for Wilmington, Delaware, but once that lost, supported an immediate move to Philadelphia, and the later construction of a city on the Potomac River.

In 1793 he returned to Dover, Delaware as a State Senator, but was soon elected to the U.S. Senate. He served there for five years, from March 4, 1793 until his resignation on January 19, 1798, and subsequent retirement from public life.

Vining died in Wilmington and is buried in an unmarked grave in the Christ Episcopal Church Cemetery at Dover.

Vining was a handsome, friendly, and outspoken member of a prominent and wealthy family. He was described as a “colorful,” speaker who “brandished a florid metaphor,” but also as “verbose” and “not above resorting to inflammatory language.” His sister, Mary, who was a frequent companion of Anthony Wayne, lived with Vining, and together they entertained frequently and lavishly. Because of this hospitality and generosity he was known as “the pet of Delaware.” But he spent through his fortune and suffering from alcoholism, and the death of his wife, went through a rapid decline on the way to an impoverished and premature death. His sister dedicated herself to raising Vining’s four sons, but they died young as well, within a year of her death in 1821.

Elizabeth Montgomery in her Reminiscences in Wilmington wrote: “His brilliant talents, not nourished by application, withered in the bud. Indolence and generosity engendered extravagance that wasted his substance.”