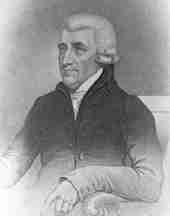 Walker was born in Virginia, the son of Dr. Thomas Walker. He received private education before attending the College of William and Mary, which he graduated from in 1764. He was a neighbor and classmate at William and Mary of Thomas Jefferson and they remained close friends until the elections of 1804-1805. In 1774 he replaced his father as a representative of the House of Burgesses. He was in the Continental Army, serving in 1777 as an aide-de-camp to General George Washington, holding the rank of colonel. In 1780, he was elected as a delegate to the Continental Congress. He then studied law. When William Grayson died in 1790, Walker was appointed to the United States Senate to serve from March 31 to November 9 of that year, when a successor was elected by the Virginia General Assembly.

In 1804 he wrote a statement to his friend and Thomas Jefferson opponent, General Henry “Lighthorse” Lee, stating that in 1768, when he had to travel to Fort Stanwix, he had asked Jefferson his neighbor to look after his family. He claimed beginning then and until 1779 Thomas Jefferson made unwanted advances to his wife Betsy.{citation needed|date=April 2013}