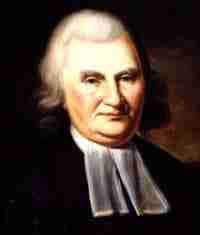 John Knox Witherspoon was born at Gifford, a parish of Yester, at East Lothian, Scotland, as the eldest child of the Reverend James Alexander Witherspoon and Anne Walker, a descendant of John Welsh of Ayr and John Knox. This latter claim of Knox descent though ancient in origin is long disputed and without primary documentation. He attended the Haddington Grammar School, and obtained a Master of Arts and Bachelor of Divinity from the University of St. Andrews. He also obtained a Master of Arts from the University of Edinburgh in 1739. He remained at the University to study divinity.

Witherspoon was a staunch Protestant, nationalist, and supporter of republicanism. Consequently, he was opposed to the Roman Catholic Legitimist Jacobite rising of 1745-1746. Following the Jacobite victory at the Battle of Falkirk (1746), he was briefly imprisoned at Doune Castle, which had a long-term effect on his health.

He became a Church of Scotland (Presbyterian) minister at Beith, Ayrshire (1745–1758), where he married Elizabeth Montgomery of Craighouse. They had ten children, with five surviving to adulthood.

From 1758-1768, he was minister of the Laigh kirk, Paisley (Low Kirk). Witherspoon became prominent within the Church as an Evangelical opponent of the Moderate Party. During his two pastorates he wrote three well-known works on theology, notably the satire “Ecclesiastical Characteristics” (1753), which opposed the philosophical influence of Francis Hutcheson.

At the urging of Benjamin Rush and Richard Stockton, whom he met in Paisley, Witherspoon finally accepted another invitation (he had earlier turned one down in 1766) to become President and head professor of the small Presbyterian College of New Jersey in Princeton. To fulfill this, he and his family emigrated to New Jersey in 1768 at the age of 45. He became the sixth President of the college, later known as Princeton University. The letters of the recruiting efforts of Rush and Stockton can be found at “John Witherspoon Comes to America”, Butterfield, L. H., Princeton University Library, Princeton, NJ. 1953

Some of the courses he taught personally were Eloquence or Belles Lettres, Chronology (history), and Divinity. Of his courses, none was more important than Moral Philosophy (a required course). An advocate of Natural Law within a Christian and republican Cosmology, which Witherspoon considered Moral Philosophy vital for ministers, lawyers, and those holding positions in government (magistrates). He was firm but good-humored in his leadership. Witherspoon instituted a number of reforms, including modeling the syllabus and university structure after that used at the University of Edinburgh and other Scottish universities. Witherspoon was very popular among both faculty and students, among them James Madison and Aaron Burr.

Upon his arrival at the College of New Jersey at Princeton, Witherspoon found the school in debt, instruction had become weak, and the library collection did not meet current student needs. At once he began fund-raising locally and back home in Scotland, added three hundred of his own books to the library, and began the purchase of scientific equipment: the Rittenhouse orrery, many maps and a “terrestrial” globe. He also firmed up entrance requirements. These things helped the school be more on par with Harvard and Yale. According to Herbert Hovenkamp, his most lasting contribution was the initiation of the Scottish Common-Sense Realism, which he had learned by reading Thomas Reid and two of his expounders Dugald Stewart and James Beattie.

As the College’s primary occupation at the time was training ministers, Witherspoon was a major leader of the early Presbyterian church in America. Witherspoon also helped to organize Nassau Presbyterian Church in Princeton, N.J.

Witherspoon was a prominent evangelical Presbyterian minister in Scotland before becoming the sixth president of Princeton in 1768. Upon his arrival, he transformed a college designed predominantly to train clergymen into a school that would equip the leaders of a new Protestant national generation. Witherspoon made fundamental changes to the moral philosophy curriculum, strengthened the college’s commitment to natural philosophy an early form of science tempered with Christian principles, and positioned Princeton in the larger transatlantic world of the republic of letters. Although a proponent of Christian values, Witherspoon’s common sense approach to the public morality of civil magistrates was more influenced by the Enlightenment ethics of Scottish philosophers Francis Hutcheson and Thomas Reid than the Christian virtue of Jonathan Edwards. In regard to civil magistrates, Witherspoon thus believed moral judgement should be pursued as a science. In this regard, he held to old Roman Republic concepts of virtue in determining moral leadership in civil magistrates.

It could be cultivated in his students or deduced through the development of the moral sense, an ethical compass instilled by God in all human beings and developed through religious education (Reid) or civil sociability (Hutcheson). Contrary to modern distinctions of morality, Witherspoon saw morality as having two distinct components: spiritual and temporal. Civil government owed more to the latter than the former in Witherspoon’s Presbyterian doctrine. Thus, public morality owed more to the natural moral laws of the Enlightenment than traditional sources of Christian ethics. However, as a Christian, Witherspoon saw the impossibility of maintaining public morality or virtue in the citizenry without an effective religion. In this sense, the temporal principles of morality required a religious component which derived its authority from the spiritual. Therefore, public religion was a vital necessity in maintaining the public morals.

Thus, while “public morals” were derived from natural virtue, its ultimate source lay in the public religion of Christianity. However, in this framework, non-Christian societies could have virtue, which, by his definition, could be found in natural law. Witherspoon, in accordance with the Scottish moral sense philosophy, taught that all human beings, Christian or otherwise, could be virtuous. Nonetheless, in keeping with the direction of destiny taught by the English Reformation, Scottish Reformation, and Irish Reformation colonial founders, he saw the new American national leaders, guided by their Christian religion, natural virtues, and republican sense of government, would be the most Protestant, Christian, free, and, therefore, noble nation, a light to the world. Many of his students, including James Madison, Aaron Burr, Philip Freneau, William Bradford, and Hugh Henry Brackenridge, played prominent roles in the development of the new nation.

As a native Scotsman, long wary of the power British Crown, Witherspoon saw the growing centralization of government, progressive ideology of colonial authorities, and establishment of Episcopacy authority as a threat to the Liberties of the colonies. Of particular interest to Witherspoon was the crown’s growing interference in the local and colonial affairs which previously had been the prerogatives and rights of the American authorities. When the crown began to give additional authority to its appointed Episcopacy over Church affairs, British authorities hit a nerve in the Presbyterian Scot, who saw such events in the same lens as his Scottish Covenanters. Soon, Witherspoon came to support the Revolution, joining the Committee of Correspondence and Safety in early 1774. His 1776 sermon “The Dominion of Providence over the Passions of Men” was published in many editions and he was elected to the Continental Congress as part of the New Jersey delegation, appointed Congressional Chaplain by President Hancock, and in July 1776, voted to adopt the Virginia Resolution for Independence. In answer to an objection that the country was not yet ready for independence, according to tradition he replied that it “was not only ripe for the measure, but in danger of rotting for the want of it.” [[File:Declaration independence.jpg|thumb|left|300px|In John Trumbull’s famous painting, Witherspoon is the second seated figure from the (viewer’s) right among those shown in the background facing the large table.]]

Witherspoon served in Congress from June 1776 until November 1782 and became one of its most influential members and a workhorse of prodigious energy. He served on over 100 committees, most notably the powerful standing committees, the board of war and the committee on secret correspondence or foreign affairs. He spoke often in debate; helped draft the Articles of Confederation; helped organize the executive departments; played a major role in shaping foreign policy; and drew up the instructions for the peace commissioners. He fought against the flood of paper money, and opposed the issuance of bonds without provision for their amortization. “No business can be done, some say, because money is scarce,” he wrote. He also served twice in the New Jersey Legislature, and strongly supported the adoption of the United States Constitution during the New Jersey ratification debates.

In November 1778, as British forces neared, Witherspoon closed and evacuated the College of New Jersey. The main building, Nassau Hall, was badly damaged and his papers and personal notes were lost. Witherspoon was responsible for its rebuilding after the war, which caused him great personal and financial difficulty.

In 1780 he was elected to a one-year term in the New Jersey Legislative Council representing Somerset County.

Witherspoon had suffered eye injuries and was blind by 1792. He died in 1794 on his farm Tusculum, just outside of Princeton, and is buried in the Princeton Cemetery.

Witherspoon has been viewed as being “not a profound scholar” but “an able college president”.

From among his students came 37 judges, three of whom made it to the U.S. Supreme Court; 10 Cabinet officers; 12 members of the Continental Congress, 28 U.S. senators, and 49 United States congressmen. His most prominent students were Aaron Burr and James Madison. When the General Assembly of the Presbyterian Church in America met in 1789, 52 of the 188 delegates had studied under Witherspoon.

The President’s House in Princeton, New Jersey, his home from 1768 to 1779 is a U.S. National Historic Landmark. A bronze statue at Princeton University by Scottish sculptor Alexander Stoddart is the twin of one outside The University of the West of Scotland, Paisley, Scotland. In Princeton today, a University dormitory built in 1877, the street running north from the University’s main gate, and the local public middle school all bear his name. Another statue stands near Dupont Circle in Washington, D.C., at the intersections of Connecticut Avenue, N and 18th Streets.

Paisley, Scotland honored Witherspoon’s memory by naming a newly constructed street in the town center after him, in honor of his having lived in Paisley for a portion of his adult life.

A son-in-law was Congressman David Ramsay, who married Frances Witherspoon on 18 March 1783. Another daughter, Ann, married Samuel Stanhope Smith, who succeeded Witherspoon as president of Princeton in 1795.

The Witherspoon Society is a body of laypeople within the Presbyterian Church (USA) in existence since 1979 that is activist in liberal and progressive causes that takes its name from John Witherspoon.

A merchant ship, the SS John Witherspoon, saw service during World War II. It was part of convoy PQ-17, and was sunk by a German U-boat in the North Atlantic on July 6, 1942.

The Witherspoon Institute is an independent research center that works to enhance public understanding of the moral foundations of free and democratic societies. Located in Princeton, it promotes the application of fundamental principles of republican government and ordered liberty to contemporary problems through a variety of centers, research programs, seminars, consultations, and publications.

John Witherspoon College is a private liberal arts college in the Black Hills of South Dakota founded after Witherspoon’s vision and accomplishments.

Witherspoon was portrayed in the musical 1776, about the debates over and eventual adoption of the Declaration of Independence, by Edmund Lyndeck in the 1969 stage play and by James Noble in the 1972 film.

The Witherspoon Building at Philadelphia is named in his honor. It was added to the National Register of Historic Places in 1978.

John Witherspoon is said to be a relative of actress Reese Witherspoon. However, it has been noted by the Society of the Descendants of the Signers of the Declaration of Independence that her claim of being a direct descendant has yet to be verified.