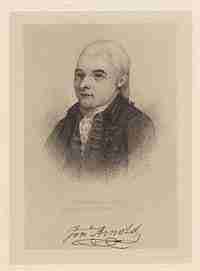 Jonathan Arnold (December 3, 1741 – February 1, 1793) was an American physician and statesman from New England. He was born in Providence, Rhode Island. Arnold served in the Continental Army as a surgeon, and directed the army hospital at Providence. He represented Rhode Island as a delegate to the Continental Congress in 1782 and 1783. He moved to a farm in St. Johnsbury, Vermont in 1787, and later served as a judge.