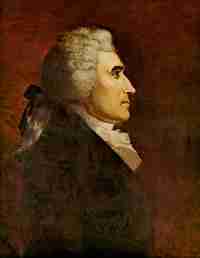 Jonathan Dayton (October 16, 1760{spaced ndash}October 9, 1824) was an American politician from the U.S. state of New Jersey. He was the youngest person to sign the United States Constitution and a member of the U.S. House of Representatives, serving as the fourth Speaker of the United States House of Representatives, and later the U.S. Senate. Dayton was arrested in 1807 for treason in connection with Aaron Burr’s conspiracy, he was never put on trial, but his national political career never recovered.

Dayton was born in Elizabethtown (now known as Elizabeth) in New Jersey. He was the son of Elias Dayton, a merchant who was prominent in local politics and had served as a militia officer in the French and Indian War. He graduated from the local academy, run by Tapping Reeve and Francis Barber, where he was classmates with Alexander Hamilton. He then attended the College of New Jersey (now known as Princeton University). He left the College of New Jersey in 1775 to fight in the revolution, though he would later receive an honorary degree in 1776.

During the Revolutionary War, 15 at the outbreak in 1775, served under his father (Elias ) in the 3rd New Jersey Regiment as an ensign. On Jan. 1, 1777 he was commissioned a lieutenant and served as paymaster. He saw service under Washington fighting, at both the battles of Brandywine Creek and Germantown. The son remained with Washington at Valley Forge, and helped push the British from their position in New Jersey into the Safety of New York City. In October 1780, along with an uncle were captured by loyalist who held him captive for the winter, released in the coming year. They again served under ‘s father, Elias, in the New Jersey Brigade. Now only 19, was promoted to rank of captain on March 30, 1780, and transferred to the second New Jersey, where he took part in the ensuing Yorktown Campaign fighting at the Battle of Yorktown. The Revolutionary War Pension files also states that he served as Aid-de-Camp to Genenal Sullivan on his expedition against the Indians from May 1 to Nov 30, 1779.

After the war, Dayton studied law and created a practice, dividing his time between land speculation, law, and politics. After serving as a New Jersey delegate to the Continental Congress and Constitutional Convention ( which he was the youngest member of, at the age of 26), he became a prominent Federalist legislator. He was a member of the New Jersey General Assembly from 1786–1787, and again in 1790, and served in the New Jersey Legislative Council (now the New Jersey Senate) in 1789.

Dayton was elected to the U.S. House of Representatives in 1789, but he did not take his seat until he was chosen again in 1791. He served as speaker for the Fourth and Fifth Congress. Like most Federalists, he supported the fiscal policies of Alexander Hamilton, and helped organize the suppression of the Whiskey Rebellion. He supported the Louisiana Purchase and opposed the repeal of the Judiciary Act of 1801.

Wealthy from his heavy investments in Ohio where the city of Dayton would later be named after him, Dayton lent money to Aaron Burr becoming involved by association in the “conspiracy” in which Burr was accused of intending to conquer parts of what is now the western United States. (This was never proven.) Dayton was exonerated, but this effectively ended his political career. 😛

He married Susan Williamson and had two daughters. Susan’s Revolutionary War Pension Application W.6994 states that the marriage occurred on the twenty-eighth day of March, in the year seventeen hundred and seventy nine. A supporting letter, written by Aaron Ogden, a Captain in the New Jersey Brigade, states that he “was present at the marriage of the said Jonathan Dayton and Susan his wife ; which marriage ceremony was performed by the Reverent Mr. Hoyt, a Presbyterian Clergyman… in the fore part of spring of the year seventeen hundred and seventy nine (1779) while the New Jersey Brigade lay at Elizabethtown in the Borough of Elizabeth and state of new Jersey;”

After resuming his political career in New Jersey, he died Oct. 9, 1824 in his hometown and was interred in an unmarked grave now under the present St. John’s Episcopal Church in Elizabeth which replaced the original church in 1860. Shortly before his death, Lafayette visited him, as reported in an obituary: In New-Jersey, Hon. JONATHAN DAYTON, formerly Speaker of the House of Representatives of Congress, and a Hero of the Revolution. When the Nation’s Guest lately passed New-Jersey, he passed the night with General Dayton, and such were the exertions of this aged and distinguished federalist, to honor the Guest, and gratify the wishes of his fellow citizens to see, that he sunk under them ; and expired, without regret, a few days after (Columbian Centinel (Boston, MA), Oct 20, 1824, p. 2).

The city of Dayton, Ohio, was named after Jonathan Dayton. While he never set foot in the area, he was a signatory to the constitution and, at the time the city was established in 1796, he owned (in partnership with Arthur St. Clair, James Wilkinson and Israel Ludlow) 250,000 acres (1,011 km²) in the Great Miami River basin.