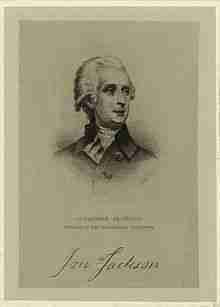 Jonathan Jackson was born in 1743 in Boston, Massachusetts. He was the son of Edward Jackson (1708–1757) and Dorothy Quincy Jackson. He graduated from Harvard in 1761 and then moved to Newburyport to take up a mercantile career.

Jackson first served as an apprentice to another merchant, Patrick Tracy. By 1765 he had entered business on his own as a shipper and importer. He became prosperous and in 1772 he married his mentor’s daughter, Hannah Tracy. Shortly after he went into a partnership with his wife’s brothers, John and Nathaniel Tracy. The firm of Jackson, Tracy, & Tracy failed during the revolution. So, after 1782, Jonathan took a series of salaried jobs.

In 1780 Jackson joined John Hancock and other community leaders in the founding of the American Academy of Arts and Sciences.

Despite his dependence on foreign trade, Jackson became a supporter of the American Revolution. He converted some of his merchant ships to privateers. In 1775 he was elected to the revolutionary Massachusetts Provincial Congress. He became a member of the state’s Committee of Correspondence and headed the Essex County Committee of Safety.

Jackson was elected to the Massachusetts House of Representatives in 1777. He attended the state’s Constitutional Convention in 1779. Then in 1782, Massachusetts sent him as one of their delegates to the Continental Congress. But, by this time his financial reverses made him take a job, although he did serve one term in the Massachusetts’s state Senate in 1789.

Eventually Jackson was able to combine his need for employment with his desire for public service. In this period, elected positions generally had no pay. He served as the first U.S. Marshal for the district of Massachusetts (1789–1791), then as a federal Supervisor of Revenue from 1792 until 1801.

Jackson served as Treasurer for the Commonwealth of Massachusetts from 1802 to 1806, and as treasurer of Harvard University. He was president of the Boston Bank, which later became the First National Bank of Boston. When he died in Boston in 1810, he was buried in the Old Granary Burying Ground there.

Jonathan Jackson and Hannah Tracy had nine children. Their daughter, Hannah, married the manufacturer Francis Cabot Lowell, who went into business with their son, Patrick Tracy Jackson. Their son Charles Jackson went on to serve on the Massachusetts Supreme Court. Their son James Jackson became a physician and co-founded Massachusetts General Hospital, becoming its first physician.

Jonathan Jackson’s great-grandsons included Oliver Wendell Holmes, Jr. who served on the U.S. Supreme Court. In the 2004 elections, both George W. Bush and John Kerry published a genealogy in which they claimed Jackson as an ancestor, though neither appear to be actually related.

* Thoughts Upon the Political Situation of the United States of America in which that of Massachusetts is More Particularly Considered; with Some Observations on the Constitution for a Federal Government: Addressed to the People of the Union (Worcester, 1788).