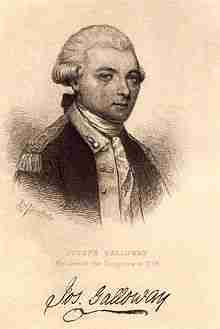 Joseph Galloway (1731 – 10 August 1803) was an American politician. Galloway became a Loyalist during the American War of Independence, after serving as delegate to the First Continental Congress from Pennsylvania. For much of his career in Pennsylvanian politics he was a close ally of Benjamin Franklin, and he became a leading figure in the colony. As a delegate to the Continental Congress Galloway was a moderate, and he proposed a Plan of Union which would have averted a full break from Britain. When this was rejected, Galloway moved increasingly towards Loyalism.

After 1778 he lived in Britain, where he acted as a leader of the Loyalist movement and an advisor to the government. Once Britain’s Parliament granted American independence as part of the Peace of Paris (1783) many Loyalists went into forced exile and Galloway permanently settled in Britain.

Galloway was born near West River, Anne Arundel County, Maryland, the son of a landowner in the Colony. He moved with his father to Pennsylvania in 1749, where he received a liberal schooling. He studied law, for a time alongside William Franklin the son of Benjamin Franklin and later a fellow leading Loyalist, and was admitted to the bar and began to practice in Philadelphia.

Galloway soon became involved in the politics of the colony. He was a member of the Pennsylvania Provincial Assembly from 1756 to 1774 and served as Speaker of the House from 1766 to 1774. He was a prominent member of the faction which opposed Pennsylvania being a Proprietary Colony of the Penn family, and called for it to be turned into a Crown Colony. Both Galloway and Franklin devoted a great deal of effort in lobbying London to bring the colony directly under the Crown’s control.

Galloway was throughout his career a British-American nationalist, believing that the British Empire offered a citizen greater liberties than any nation on earth. He believed that most Americans would prefer to remain loyal to the Crown if only they were given a legitimate and effective government that would inspire their loyalty.

Galloway urged reform of the imperial administration and was critical of the trade laws, the Stamp Act of 1765, and the Townshend Acts enacted in 1767; and as early as 1765 he had a conciliatory plan to end the disputes between Britain and the colonies. He believed that the British had the right to tax and govern the colonies, keep the peace, and help the colonies to survive and flourish (although he did also believe the colonies’ words should be heard). Congress however voted to expunge Galloway’s plan from their journal, so he published it himself in 1775, reprimanding Congress for ignoring his correct analysis of Parliament’s powers and colonial rights. He proposed a written constitution and joint legislature for the whole British Empire. When rejected, he declined election to the Continental Congress.

In 1775, when the Assembly declined Galloway’s recommendation that it abandon its defiance of Britain, Galloway left the Assembly and the Congress while Franklin sided with the movement towards colonial independence.

In winter of 1777, Galloway joined the British General Howe and accompanied him on his capture of Philadelphia. During the British occupation, he was appointed Superintendent of Police, and headed the civil government. He had a reputation as a highly efficient administrator, but one who repeatedly interfered in military affairs. He aggressively organised the Loyalists in the city, but was dismayed when the British army decided to abandon the city in 1778 following France’s entry into the war. When the British army withdrew to New York, he went with them.

In 1778, he fled to Britain with his daughter, never to return to the colonies, and became a leading spokesman of American Loyalists in London. In 1778 the General Assembly of Pennsylvania convicted him of high treason and confiscated his estates. Much of his property was the inheritance of his wife, Grace Growdon Galloway. They resided in Trevose Manor, now known as Growden Mansion, and owned much of the land which is now Bensalem, Pennsylvania In 1779 he appeared as a government witness in a parliamentary enquiry into the conduct of Lord Howe and General Howe during the Philadelphia Campaign of which he was deeply critical. When Galloway fled Philadelphia with the British his wife remained in the city with the hope of gaining her father’s inheritance. She only left the family home when forcibly evicted by Charles Willson Peale.

He was influential in convincing the British that a vast reservoir of Loyalist support could be tapped by aggressive leadership, thus setting up the British invasion of the South. After the war Galloway spent his remaining years in religious studies and writing in England.

He died in Watford, Hertfordshire, England on 10 August 1803.

Galloway Township, New Jersey, may have been named for him, although there is another possible source of the name. 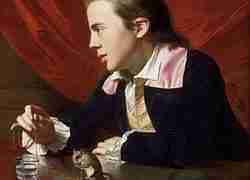