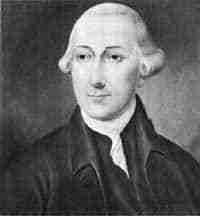 Joseph Hewes (January 23, 1730 – November 10, 1779) was a native of Princeton, New Jersey, where he was born in 1730. Hewes’s parents were members of the Society of Friends, commonly known as Quakers. Immediately after their marriage, they moved to New Jersey, which became Joseph Hewes’s home state. Hewes attended Princeton but there isn’t any evidence that he actually graduated. What is known is that he became an apprentice of a merchant and in fact became a very successful merchant. After finishing his apprenticeship he earned himself a good name and a strong reputation, which would serve him well in becoming one of the most famous signers of the Declaration of Independence for North Carolina, along with William Hooper and John Penn. Hewes moved to Edenton, North Carolina at the age of 30 and won over the people of the colony with his charm and honorable businesslike character. Hewes was elected to the North Carolina legislature in 1763, only three years after he moved to the colony. After being re-elected numerous times in the legislature, Hewes was now focused on a new and more ambitious job as a continental congressman.

By 1773, the majority of North Carolina was in favor of independence. North Carolina elected Hewes to become a representative of the Continental Congress in 1774. The people of North Carolina thought that he would best represent them because of his activism for the American cause of independence, which appealed to people in other states as well. However initially, Joseph Hewes was not in favor of independence but came to accept the idea due to the urging of his constituents in North Carolina. In later years John Adams wrote of the struggles that Hewes experienced as he set about serving in the Continental Congress: “For many days the majority depended on Mr. Hewes of North Carolina. While a member one day was speaking and reading documents from all the colonies to prove that public opinion, the general sense of all, was in favor of the measure, when he came to North Carolina and produced letters and public proceedings that the majority in that colony were in favor of it, Mr. Hewes, who had hitherto constantly voted against it, started suddenly upright and lifting both hands to heaven as if he had been in a trance, cried out, “It is done and I will abide by it.” I would give more for the perfect painting of the terror and horror upon the face of the old majority at that critical moment than for the best piece of Raphael. The question, however, was eluded by an immediate motion for adjournment”. Though the people of the United States wanted independence, Hewes found it much harder in Congress to convey his opinion without being laughed at or scolded. Even in the year leading up to the revolution, more than two-thirds of the Continental Congress still believed that ties between King George and the colonies could stay intact. Hewes was barely able to speak in Congress because he was usually interrupted by those who disagreed with him. Nevertheless he was actively involved in many committees, most of which favored the revolution. One such committee was the Committee of Correspondence, which advocated ideas that supported independence. One of the ideas that Hewes contributed to this committee was the following statement: “State the rights of the colonies in general, the several instances in which these rights are violated or infringed, and the means most proper to be pursued for obtaining a restoration of them.”

Traditionally the Quakers were pacifists. Ironically, Hewes was not only one of the few people in favor of a war against Britain but was one of the few Quakers in Congress. The Quakers not only opposed war, but strongly opposed the committees that supported war too. Despite Joseph Hewes’ obvious departure from Quaker principles, he did continue to have a relationship with his family and visited his mother, a Quaker minister, when he was able. There isn’t any record of Mr. Hewes ever relinquishing his Quaker membership nor is there any evidence that he was disowned by any Friends Monthly Meeting. Upon his death, he left sizable bequests to not only his family but also to several Quaker institutions.

==Secretary of the Navy==

At the beginning of the year 1776, Hewes was appointed as the new Secretary of the Naval Affairs Committee. John Adams often said that Hewes “laid the foundation, the cornerstone of the American Navy.” Alongside General George Washington, Hewes became one of the greatest military achievers in American history. He was also involved with the secret committee of claims, which further promoted the independence of the colonies. Hewes was one of the primary reasons why North Carolina submitted to independence before any other colony.

Hewes was initially faced with an ill equipped navy of which to fight the British Navy. To remedy this, he provided his own extensive fleet of ships, outfitted them, and chose the most capable of men to captain these ships. John Paul Jones was one of these captains for whom Hewes was instrumental in providing a command. Hewes served until 1779.

After Hewes signed the Declaration of Independence, he retreated to his home in New Jersey because of his ailing health. Despite his health problems, Hewes ran for re-election in Congress but failed to win. In 1779 he finally served his last few months as a congressman and on November 10, 1779, Joseph Hewes died just before his fiftieth birthday. All of the Continental Congress came to his funeral the following day and mourned the great loss that the country had suffered. A 1779 inventory signed by Hewes, as well as a 1780 newspaper account of his estate sale, both indicate that Hewes owned slaves. Hewes kept a diary in the last years of his life. Before he died, he wrote that he was a sad and lonely man and had never wanted to remain a bachelor. The girl he loved had died a few days before their wedding and he never married leaving no children to inherit his money and estates.

Hewes was a member of Unanimity Lodge No. 7, visited in 1776, and was buried with Masonic funeral honors.

He is buried at Christ Church Burial Ground, Philadelphia, Pennsylvania.