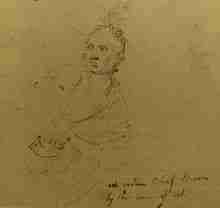 Joseph Louis Cook or Akiatonharónkwen (died October 1814) (Mohawk) was an Iroquois leader and soldier for the Continental Army during the American Revolution. Born to a black father and an Abenaki mother in what is now Quebec, he was adopted as a Mohawk at a village in New York where they settled. He became an influential leader among the Mohawk and distinguished himself as a warrior for the French during the French and Indian War.

During the American Revolutionary War, Cook supported the rebel colonists and joined their fight. He became the highest-ranking Native American officer in the Continental Army, achieving the rank of lieutenant colonel. He led Oneida warriors against the British in some actions. After the war, he settled in central New York State, where he became an important adviser to the Oneida. He represented them and the Seven Nations of Canada to negotiate with the government of New York state in trying to achieve more justice in postwar land deals.

Cook was born as Nia-man-rigounant to an Abenaki mother and black father in Quebec. The family was taken captive in a French raid in 1745. A French officer planned to keep the boy as a slave, but the Mohawk intervened and gave him back to his mother.

Out of gratitude, she took her son and followed the Mohawk warriors back to their village of Caughnawaga in New York. Cook was adopted into the tribe and grew up learning their culture and language. In the Mohawk language, he was named Akiatonharónkwen, translates as “he unhangs himself from the group.” Over the years, he also learned French, as he was educated by Jesuit missionaries in the village.

Later he learned English as well. Among the English, he is most often referred to as Louis Cook or Colonel Louis.

Cook lived in the Mohawk village of Caughnawaga. He fought with the Mohawk nation on the side of the French against the British and their colonists in the French and Indian War. A friend, Eleazer Williams, later wrote that Cook was at the battle against the Braddock expedition in 1755 (the Braddock party included the young George Washington), and served under General Montcalm at the Battle of Fort Oswego in 1756. The same year, he was wounded in a skirmish with Rogers’ Rangers near Fort Ticonderoga. His first command came in the 1758 Battle of Carillon, where he was praised by General Montcalm. He was also present at the Battle of Sainte-Foy in 1760, serving under the Chevalier de Levis.

Following the war, Cook returned to Caughnawaga and married Marie-Charlotte. As he never fully accepted the British victory and found his homeland increasingly overrun by British colonists, he moved with his family to Akwesasne, a Mohawk village on the Quebec side of the St. Lawrence River.

Although the Mohawk and three other of the Iroquois nations sided with the British during the American Revolution, hoping to expel the colonists from their lands, Cook allied with the Thirteen Colonies, as did the Oneida and Tuscarora. As early as 1775, he offered his services to General George Washington. Cook was with Benedict Arnold on his expedition into Quebec, when he was already known as “Colonel Louis.” Washington met again with Cook in 1776.

In New York, Louis Cook was present at the Battle of Oriskany, and participated in the Saratoga Campaign. He led a large body of Oneida warriors under General Robert Van Rensselaer. Following the Battle of Klock’s Field, Cook forded a river in pursuit of Sir John Johnson while General Rensselaer delayed. Infuriated, Colonel Louis shook his sword at Rensselaer and accused him of being a Tory.

Cook was with the Continental Army at Valley Forge in the winter of 1777. In spring 1778, Peter Stephen DuPonceau wrote of meeting Cook, dressed in American regimentals, after hearing the officer singing a French aria. In March of that year, General Philip Schuyler sent Cook to destroy British ships at Niagara to prevent another Canadian expedition.

The nickname of “Colonel Louis” was made fact on June 15, 1779, when Cook received a commission from the Continental Congress as a Lieutenant Colonel in the Continental Army. This commission was the highest rank awarded to an American Indian during the Revolution, and is the only known Continental Army commission given to a man of known African descent. Colonel Louis was with Lieutenant-Colonel Marinus Willett at the Battle of Johnstown in 1781, one of the last North American battles of the Revolution.

During the war, Cook became a personal enemy of Captain Joseph Brant, a Mohawk who supported the British. When each returned to their homes after the war, their personal conflict divided the Mohawk nation and brought the Seven Nations of Canada and the Iroquois then at what would be the Six Nations Reserve to the brink of war.

Cook settled in the area of Sterling, New York following the war. He became an influential adviser to the Oneida tribe because he could speak both French and English.

While living at Onondaga Cook married Marguerite Thewanihattha. They had several children.

Cook convinced the Oneida to lease their lands, using the example of the Mohawk tribe at Kahnawake. The Oneida leased nearly {convert|5|e6acre|km2} to Colonel John Livingston for 999 years. Conflicting claims were made on many of the Iroquois lands, and much of the land was lost to the state of New York because the Iroquois were forced to cede land, as allies of the defeated British. The Oneida named Cook and Peter Otsequette to negotiate with Governor George Clinton for a return of- or compensation for- their land. Governor Clinton made some minor concessions to the Oneida in the Treaty of Fort Schuyler, but generally did not yield much to the Oneida representatives. Today, Cook has been criticized for negotiating bad land deals for the Oneida.

Despite his shortcomings in the Oneida land negotiations, between 1792 and 1796 Cook was also selected by the Seven Nations of Canada on six separate occasions to represent them in land negotiations with New York state. The negotiations were related to lands sold by the people of two villages, Grand River and Tyendinaga Mohawk Territory, Ontario, who were led by Joseph Brant. The Mohawk peoples of Akwesasne and Kahnawake, two of the Seven Nations, denied that those villages had the right to sell what was common Mohawk land in New York. Ultimately, New York prevailed in keeping control of the land, and the division between Cook and Brant was deepened.

By 1789, Cook had settled at Akwesasne, where he became an influential chief. The Mohawk reserve eventually established there spans the US-Canadian border and the St. Lawrence River. He argued that the St. Regis Indians (as they were sometimes called) and the Seven Nations should remain neutral in the War of 1812 between the US and Great Britain. The United States forgot his earlier service and detained him at Fort Niagara until he produced his commission, as well as letters from George Washington.

Although too elderly to participate, Cook followed the United States army into Canada during the war and was present at the Battle of Lundy’s Lane. He was involved in a skirmish and fell from his horse. The injuries proved fatal; he died in the American camp in October 1814. Cook was given a military salute at his funeral, and was buried near Buffalo, New York.