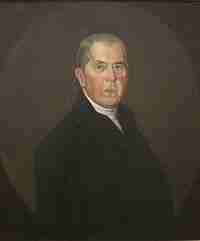 Joseph Platt Cooke (January 4, 1730 – February 3, 1816) was an American military officer in the Revolutionary War, a Connecticut politician, and twice a delegate to the Congress of the Confederation. He was born in Stratford, Connecticut and graduated from Yale College in 1750. He died in Danbury, Connecticut.

In 1771 he was appointed colonel of the Sixteenth Regiment of the Connecticut militia, and during the Revolutionary War he accompanied General Wolcott’s forces to New York in 1776. He was in command of the state forces when the British burned Danbury on April 26 and April 27, 1777. His own home, which he had built at 342 Main Street in 1770, was partially destroyed by fire. He resigned his colonelcy early in 1778. In 1781 his home served as a meeting place for George Washington and the French military leaders, the Comte de Rochambeau and the Marquis de la Fayette.

He was interred in Danbury at the North Main Street Cemetery.