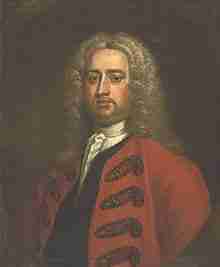 Joseph Wanton (1705–1780) was a merchant and governor of the Colony of Rhode Island and Providence Plantations from 1769 to 1775. Not wanting to go to war with Britain, he has been branded as a Loyalist, but he remained neutral during the war, and he and his property were not disturbed.

Born in Newport of a prominent Quaker family that was very involved in Rhode Island politics, Wanton became a highly successful merchant. He is depicted in the satirical 1750s painting by John Greenwood, Sea Captains Carousing in Surinam, with other prominent merchants and seamen from the colony. As a merchant, he was involved in the trade of most goods, including slaves, and at one point his ship with a cargo of rum and slaves was confiscated off the coast of Africa by a French privateer.

With no known civic background, Wanton was elected as governor of the colony in 1769, and served for six years. With the American Revolutionary War on the horizon, he was involved with a large array of issues and incidents, most notably the Gaspee Affair in 1772, where he played an important role in thwarting the crown from finding the members of the group of colonists that boarded and burned the royal schooner Gaspee. The formation of the Continental Congress took place during his administration, and he was in continuous communication with governors of other colonies. He also became a founder and trustee of the new college in the Rhode Island colony, eventually named Brown University.

As the Revolutionary War approached, members of the General Assembly were getting very hawkish, and when Wanton was elected for the seventh time in 1775, he refused to agree to the raising of an army of 1500 men, and would not commission new officers. He also would not immediately take the oath of office, and for these reasons the Assembly refused to seat him as Governor, and formally removed him from office a few months later, with Nicholas Cooke taking his place. While he was not overtly Loyalist, he did not see a war with Great Britain to be in the interest of the colony. He retired to his home in Newport where he was undisturbed during the war, and died before its conclusion, in 1780.

While some sources say he graduated from Harvard College in 1751,{sfn|Gaspee Archives} it is far more likely that this was his 21-year old son, Joseph, Jr., rather than the 46-year old Wanton, who was by then a highly successful merchant sailing the globe in pursuit of commercial interests. That he was well educated, however, is certain from the vast amount of correspondence in which he engaged, particularly as Governor of the colony. In the mid-1750s, the Boston portraitist, John Greenwood, followed a group of sea captains and merchants to Surinam on the northeast coast of South America.{sfn|American Stories} The trading usually took time, so the men often waited in pubs.{sfn|American Stories} Being commissioned by the merchants to create a satirical painting, Greenwood concocted a 22-figure tavern scene, showing himself among the affluent traders, all subject to the “intoxicating effects of alcohol and economic ambition.”{sfn|American Stories} Most accounts agree that Wanton is the bald man slumped in a chair by the table, being doused with a pitcher of rum, by one account,{sfn|American Stories} or of punch and vomit, by other accounts.{sfn|Colonial Merchants}{sfn|Edward Wanton}

As a merchant, Wanton was involved in the maritime trade of a variety of goods. During the first half of the 18th century the slave trade was booming in Newport, and from 1708 to 1755 the population of black slaves in the colony burgeoned from 220 to nearly 4700.{sfn|Bicknell|1920|pp=1089-90} In 1758 Wanton declared that he had sailed the Snow King of Prussia with a cargo of 124 hogsheads of rum and 54 slaves. While at anchor along the African coast, he and his cargo were captured by a French cruiser.{sfn|Bicknell|1920|p=1090}

There is no evidence that Wanton held any important office in the colony prior to his election as governor in May 1769.{sfn|Bicknell|1920|p=1090} Once elected, his first act was to send a letter to Lord Hillsborough, the Colonial Secretary of State, with whom his predecessor, Josias Lyndon, had corresponded.{sfn|Bicknell|1920|p=1090} In the letter he boldly stated that it was not possible for him as Governor to obey the instructions of the crown “without acting diametrically opposite to the constitution of the colony…; we cannot but humbly express our opinion that the power exercised by the Parliament of Great Britain (in which we are not represented), of raising monies upon us without our consent (which it is possible under a bad administration, may be extended to our last penny), is a real grievance; we are not without hopes that his Majesty’s rejecting our petition, is entirely owing to the false information he hath received from America, of the state and temper of his subjects here.”{sfn|Bicknell|1920|p=1091}

In March 1772, the people of the colony were harassed by his Majesty’s schooner Gaspee, with eight guns, stationed in the Narragansett Bay to enforce the revenue acts.{sfn|Arnold|1894|p=309} The commander, Lieutenant William Dudingston, had engaged in a number of annoyances upon vessels in the bay, detaining them without pretext, stopping market boats, and sometimes plundering the people ashore.{sfn|Arnold|1894|p=309} He violated the charter of the colony by acting without showing his commission.{sfn|Arnold|1894|pp=309-10} The inhabitants of Providence complained to Deputy Governor Darius Sessions, who consulted with Chief Justice Stephen Hopkins, who offered the opinion “that no commander of any vessel has a right to use any authority in the body of the colony, without previously applying to the governor, and showing his warrant for so doing, and also being sworn to a due exercise of his office.”{sfn|Arnold|1894|p=310}

A report was sent by a crew member to Montagu, who then forwarded a copy to Wanton with the request to apprehend the offenders. Wanton then issued his proclamation, offering 100 pounds reward for evidence sufficient for conviction of the guilty parties.{sfn|Arnold|1894|p=313} An active correspondence then ensued between Wanton, the Admiral, and Lieutenant Dudingston, with an account of the event sent to Lord Hillsborough.{sfn|Arnold|1894|p=313} An escaped slave who was with the expedition gave names of some of the men involved to Admiral Montagu, who then forwarded this deposition to Wanton, requesting that the instigators be questioned. Wanton, instead of obeying the request, took depositions invalidating the testimony of the slave.{sfn|Arnold|1894|p=314} When news reached England, the King issued a proclamation offering a reward of £1000 each for either of the leaders of the expedition, and £500 for each of the other involved parties.{sfn|Arnold|1894|p=315} Wanton, along with others from neighboring colonies, was commissioned to inquire into the report upon the facts.{sfn|Arnold|1894|p=315}

The perpetrators of the Gaspee incident were well known, and among the most prominent citizens of the colony.{sfn|Arnold|1894|p=317} Some of the younger and more rash of the accomplices had openly boasted of the events, while the ship still smoldered off the shore.{sfn|Arnold|1894|p=317} Wanton and the other Rhode Island leaders were successful in subtly hampering the progress of the investigations, and amid all of the communications, commissions, claims, and counter claims, the court could not obtain enough direct evidence to indict a single person.{sfn|Arnold|1894|p=317}

At some point during Wanton’s tenure as governor the inhabitants of Providence urged the General Assembly to prohibit the importation of black slaves into the colony. They further wanted black slaves born in the colony to be freed at a certain age. These were “in a measure” adopted by the Assembly.{sfn|Bicknell|1920|p=1093} In early 1773, a movement to unite the colonies was underway. Resolutions advising the appointment of inter-colonial committees of correspondence were unanimously passed, and sent to every colony for approval and adoption.{sfn|Arnold|1894|p=324} In May 1774, the first explicit movement for a Continental Congress was made at a meeting in Providence, and within a few weeks delegates were elected to attend.{sfn|Arnold|1894|p=334} Of the 13 colonies, all but Georgia sent representatives to the congress, with Rhode Island’s delegates being Stephen Hopkins and Samuel Ward.{sfn|Arnold|1894|pp=336,339}

On 19 April 1775, the Battle of Lexington began the long-anticipated war between the colonies and Britain.{sfn|Bicknell|1920|p=1093} Three days later the Rhode Island General Assembly, sympathetic of Massachusetts, passed an act for raising 1500 men as an army of observation, prepared to assist any sister colonies.{sfn|Bicknell|1920|p=1093} On 25 April Governor Wanton, Deputy Governor Darius Sessions and two others signed a protest against raising an army of observation “because we are of the opinion that such a measure will be attended with the most fatal consequences to our charter privileges, [and] involve the country in all the horrors of a civil war.”{sfn|Bicknell|1920|p=1093}

While critics treated Wanton harshly for his actions, and branded him as a loyalist, he did have valid concerns about going to war with the mother country. He was a resident of Newport, the wealthiest community of its size in the colonies. A war with the home government would likely cause loss of wealth and social rank in the town.{sfn|Bicknell|1920|p=1094} As an important seaport center, the occupation and devastation of the town was also likely.{sfn|Bicknell|1920|p=1094} On 2 May 1775, Wanton wrote in a letter, “The prosperity and happiness of this colony is founded in its connection with Great Brittain; for if once we are separated, where shall we find another Britain to supply our loss? Torn from the body to which we are united by religion, liberty, laws and commerce, we must bleed at every vein.”{sfn|Bicknell|1920|p=1094}

Wanton married Mary, the daughter of John Still Winthrop of New London in the Connecticut Colony, the great granddaughter of Connecticut colonial Governor, John Winthrop, Jr., and a great great granddaughter of Massachusetts colonial Governor and Boston founder John Winthrop. They had eight children, the oldest of whom, Joseph Wanton, Jr. was a Deputy Governor of the colony for two terms, but also an overt Loyalist whose Newport property was confiscated after the British occupation of Newport ended.{Sfn|Gaspee Archives}

While Wanton himself was outwardly neutral during the war, his sentiments leaned heavily toward the British, with not only his son being a Loyalist, but several of his daughters marrying prominent British officials.