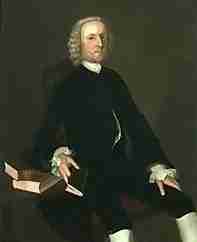 Babcock was born in Westerly in 1707 to James Babcock and Elizabeth Saunders, who were amongst Westerly’s earliest settlers. Babcock became a Seventh Day Baptist as a young man. In 1724 he graduated from Yale College as Yale’s first Rhode Island graduate. He then studied medicine in Boston and London and returned to Westerly to practice medicine in 1734. Around this time he married and purchased the Babcock-Smith House. Babcock later served as a justice on the Rhode Island Supreme Court, serving as an associate justice from 1747 to 1748 and chief justice from 1749 to 1751 and 1763 to 1764.

Babcock joined John Brown, Nicholas Brown, William Ellery, Stephen Hopkins, the Reverend James Manning, the Reverend Ezra Stiles and several others as an original fellow or trustee for the chartering of the College in the English Colony of Rhode Island and Providence Plantations (the original name for Brown University).

Babcock became Westerly’s first Postmaster in the 1770s, operating a post office from his home. During the American Revolution Babcock served as a major general in the state militia and hosted General George Washington while serving in that capacity in 1776. Babcock also served on War Council, procured equipment for the town’s troops, and served as paymaster. As a legislator he signed Rhode Island’s state declaration of independence on May 4, 1776 before the national Declaration of Independence on July 4. Joshua Babcock was also a friend of Benjamin Franklin and often hosted Franklin when he passed through Rhode Island to Boston on postmaster duties. Babock died in 1783.