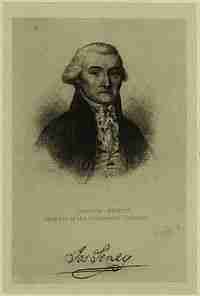 Joshua Seney (March 4, 1756 – October 20, 1798) was an American farmer and lawyer from Queen Anne’s County, Maryland. He represented the state of Maryland in the Continental Congress, and the second district of Maryland in the House of Representatives.

Joshua was born to John (1730–1795) and Ruth Benton Seney in 1756 on the family farm near Church Hill, Maryland. His grandfather, Solomon, was a French Huguenot refugee who arrived in Maryland around 1727. By the time Joshua was born the family were prosperous farmers and planters. He was educated in local schools and then attended the College of Philadelphia (now the University of Pennsylvania), graduating in 1773. He read law and was admitted to the bar, but confined himself to a private practice.

During the early days of the Revolutionary War Seney busied himself with the care of the family’s farms since his father was active as a Lt. Colonel in the militia. He was appointed the sheriff of Queen Anne’s County in 1779. He was elected to the Maryland state House of Delegates, and served there from 1785 to 1787. In 1788, Seney was sent as a delegate to the Continental Congress.

After returning to his farm, Seney was again called to political service when he was elected to the First United States Congress in 1789. He was re-elected for the 1791–1793 term but resigned from Congress on December 6, 1792 to take up his new duties as a judge of the state court for the district of Baltimore. He served as a justice until 1796.

In 1798 Seney ran for Congress again as a Republican. He defeated the incumbent Federalist, William Hindman but died before taking office. Seney died at home in 1798 and was buried in a family plot on his farm near Church Hill in Queen Anne’s County. His grave can now be found in the churchyard of St. Luke’s Church.